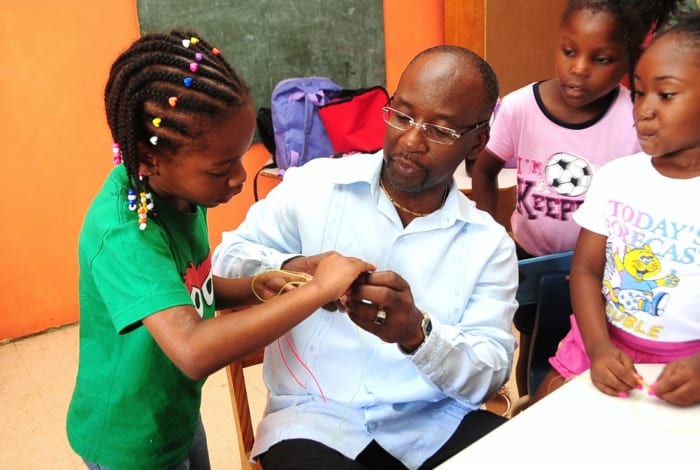 Minister of Culture, Sports and Youth, Stephen Lashley assisting this camper during a past tour of Government’s summer camps. (FP)

The Ministry of Youth will once again hold its National Summer Camps Programme, through strategic financial manoeuvres.

During a press conference held on Monday at his Sky Mall office, Minister with responsibility for Youth, Stephen Lashley, stated that through the difficult economic times, the Ministry’s staff had worked to ensure that the national summer camps initiative would be held without major changes.

“Quite a lot of the work, the planning and the monitoring and so on, is being done by Ministry personnel. They are taking over quite a lot of the functions that would have ordinarily been dealt with differently,” he said, as he indicated how the Ministry would deal with the challenge of ensuring that the $700,000 budget would stretch as necessary.

While he did note that this year the number of camps was less than in the first few years, Mr. Lashley said that the Ministry was able to moderate the effects of the current financial challenges.  He also thanked staff members of the Ministry for “working assiduously” to ensure the successful organisation of the camps.

While stating that the camps hold great opportunity for the development of the nation’s youth, he said since the staging of the national summer camp programme, the number of instances of negative and anti-social behavior have been on the decline.

The camps, which have been in operation every summer since 2008, have been an important developmental tool that has benefited more than 57,000 campers.

According to Mr. Lashley, this year the camps will also seek to educate young people on conflict resolution and drug abuse awareness.

Additionally, he pointed out that this year there will be a return of several specialist camps, including a Cultural Camp, an Agriculture Camp, the YES Camp Enterprise and one focusing on Digital Media programming.

Registration for the camps, which run from July 17 to August 18, begins on Thursday, June 22.  For more information, interested persons are asked to call the Ministry of Culture, Sports and Youth at 621-2700.