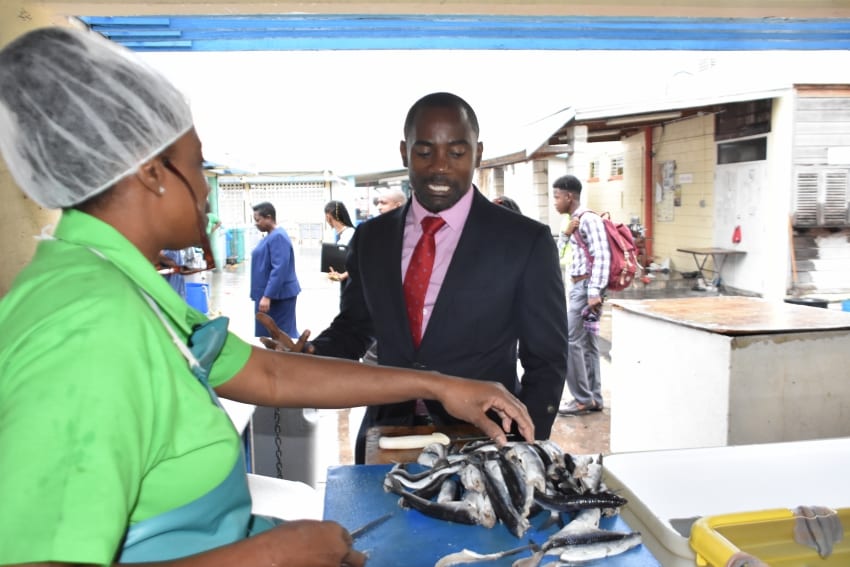 Minister of Maritime Affairs and the Blue Economy, Kirk Humphrey, on a tour of the Bridgetown Fisheries Market in June. (FP)

It will not be business as usual for those who want to ply their trade in the Barbados fishing industry.

Minister of Maritime Affairs and the Blue Economy, Kirk Humphrey, has outlined a plan of action to not only improve the physical appearance of the markets, but also the conduct and professionalism of those who ply their trade there.

He shared his vision during a Meet the Minister forum at the Bridgetown Fisheries Division last Saturday when he met with fishermen and boat owners for candid and frank discussions on a range of issues affecting the sector.

Many of these changes, Mr. Humphrey disclosed, will centre on upgrades to the minimum standards required to operate in the market and the requisite training.

“There will be a number of changes to the legislation as to who can sell fish and the [necessary] criteria. There will also be criteria for who can work the boats. We have to implement a serious training programme if we expect to meet international standards,” he indicated.

The Minister explained that these changes were critical as Government worked towards ensuring that Barbados’ fishing industry was number one in the region within the next decade.

“I am not suggesting that anybody has to go back to school. Even at the University there is PLA – Prior Learning Assessment – whereby if you do something for a long time the right way, that contributes towards a qualification, that would allow you to continue,” he pointed out.

The conditions of the markets were also flagged by the Minister as areas in need of improvement. He also mentioned the Bridgetown Port, which was described as having inadequate facilities to accommodate the present volume of boats and the boat hauling capacity across the island.

Acknowledging that he was aware that boat owners wanted to address the issue of the fuel tax, Mr. Humphrey reminded those present that Barbados was not operating in “normal times”, and therefore everyone needed to contribute to the development of the country.

He noted their concerns and gave the commitment that they would be conveyed to the Prime Minister and Cabinet. Mr. Humphrey also committed to holding monthly talks with the stakeholders in the fishing industry in an effort to improve the general standards.

Issues related to the improvement of technology on boats; the re-establishment of the Fisheries Advisory Committee; and the state of the island’s coral reefs, were also addressed by the Minister.