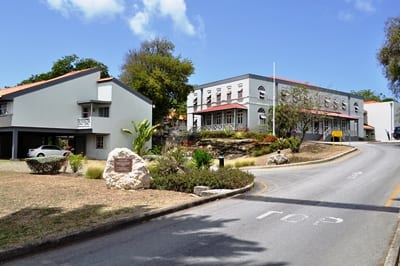 The Ministry of Education, Science, Technology and Innovation has sought to clarify reports in a section of the press on the recent visit of Governor General, Sir Elliott Belgrave, to St. Mark Primary, St. Philip.

In a statement, the Ministry explained that the nearby community centre was used instead of the school for the visit because of the uneven terrain and the difficulty of maneuvering over the steep stones.

In addition, it was pointed out that St. Mark Primary School had no hall area and there was no appropriate ‘meet and greet’ room.

The statement also listed a number of primary schools visited by Sir Elliott where the programmes were not held in the school buildings, but in the car park or courtyard.

With regard to conditions at St. Mark Primary, the Ministry stated that the school had benefited from substantial works over the past two years and was targeted for additional works to ready it for the coming term.

“The leaking roof was addressed in the summer of 2014, when the entire main building roof sheeting and structure was removed and replaced and a ring beam installed. At the same time, the adjoining nutrition room was partially refurbished. Substantial repainting of this building was carried out at that time. This overall project was at a cost of approximately $150,000,” the Ministry revealed.

It also noted that during the summer holidays last year, the school had broad canopies erected on the eastern elevations of the buildings to facilitate covered access between the separate buildings. In addition, the entire aged wooden main floor was replaced with concrete and tiled.

“The noted tile cracking has been caused by a grout defect which is arranged to be corrected by the supplier before term opens. Additionally, in Summer 2015, roof sheeting to the prefab building was partially replaced and also some of its siding repaired where faulty. This overall work cost $95,000.

“Other works already planned for completion this summer include the noted bathroom area issues; electrical wiring improvements to the main building; and the re-screening of the nutrition area. Quotations are also requested to address the external pathways if feasible at the same time,” the Ministry stated.