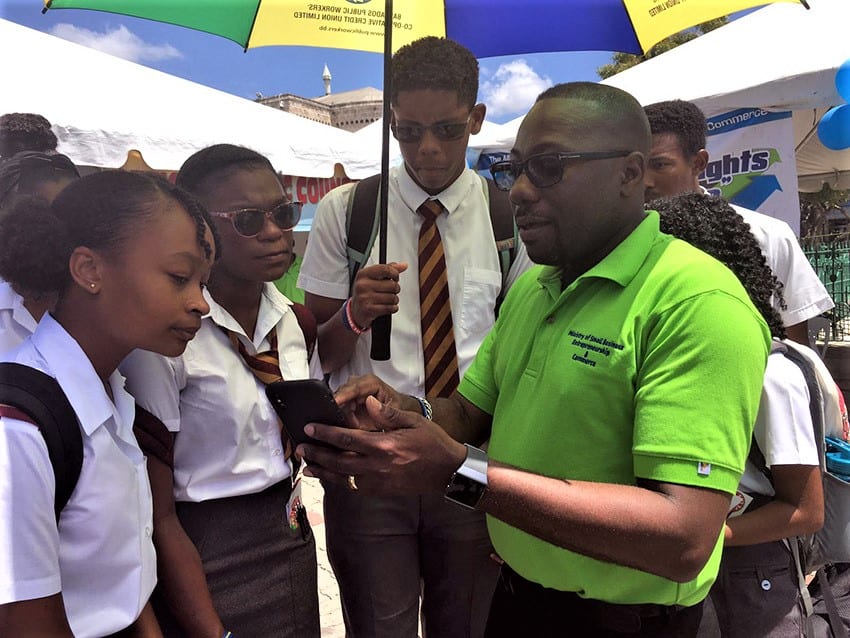 Minister of Small Business, Entrepreneurship and Commerce, Dwight Sutherland, speaking to students about the use of smart technology such as cellphones during Friday’s outreach programme in National Heroes Square to mark World Consumer Rights Day. (S.Forde/BGIS)

Government is ensuring the necessary infrastructure and legal framework are in place to empower consumers, who are key drivers of economic development, to engage in business practices that lead to purchasing items for consumption or smart products.

This was emphasized last Friday, as Minister of Small Business, Entrepreneurship and Commerce, Dwight Sutherland, spoke with media representatives at an outreach programme in National Heroes Square to mark World Consumer Rights Day.

Noting that the aim was to highlight his Ministry’s role in empowering and protecting the consumers from malpractice by businesses, he said, the outreach was also about familiarizing them about their responsibilities and rights.

“They must be able to purchase these products knowing very well that they have recourse; a place of redress just in case something goes wrong,” he said, while outlining the various roles played by the Fair Trading Commission (FTC), the Office of Public Counsel, the Barbados National Standards Institution and the Department of Commerce and Consumer Affairs.

Acknowledging that he too had learnt much from these entities, he added: “A lot of consumers don’t know that companies which put labels on products stating No Return, No Refund that is indeed against the laws of this country, as it relates to the Consumer Protection Act.  So, when you purchase products and you see anything on it marked No Return, No Refund, then you should engage the businesses to let them know that it is indeed something that is a bad business practice to place on any product that consumers are purchasing.”

Thanking the FTC for its role in bringing awareness to this, he said they were leading the charge to the extent that, where years ago, lots of these cases would have been seen, these had been reduced significantly.

Minister Sutherland also gave his perspective on businesses placing restrictions on the use of debit cards, if the bill is under a specific amount. “I keep hearing it…. I believe that once you have a card service, it’s being paid for, and whether someone purchases an item valued at $6, $5 or $10, your fees are still covered under the management system,” he said, while stating that his ministry would look into the matter that is covered under one of the statutes.

Satisfied with the response to the outreach programme, the Commerce Minister noted plans were in train for the team to go into communities and continue educating people on the role of the ministry and the rights of consumers.