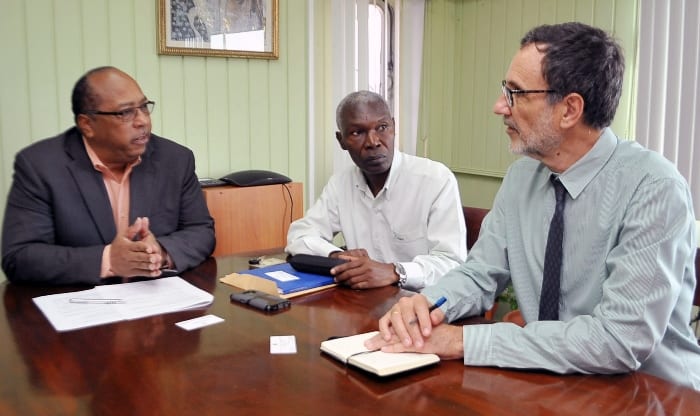 Barbados is moving to develop policies and legislation to assist in creating a modern agricultural platform, which could include aquaponics, hydroponics and greenhouses.

Dr. Estwick said it was hoped that Barbados would be able to draw on the expertise of the Israelis in the areas of waste water management and reuse. He explained that assistance with developing policy and legislation would be useful, especially as the BWA sought to move towards establishing a waste water division.

However, he stressed that technical assistance in the area of training would be required, particularly in the areas of ground water recharge, waste water reuse and the standards which should be applied.

The General Manager explained that Government would look primarily at the non-potable uses of the water in an effort to augment the island’s water supply and alleviate the impact of climate change.

The Israeli Ambassador noted that there were problems with water in the region, and suggested that different forms of technology be examined to counter this issue. He explained that while Israel was in a desert, it did not have an issue with its water supply due to the installation of desalination and treatment plants to treat waste water.

“There are solutions,” he maintained, noting that the Agricultural Research Institute in Israel catered to all types of situations and could possibly find a solution the region’s problem.