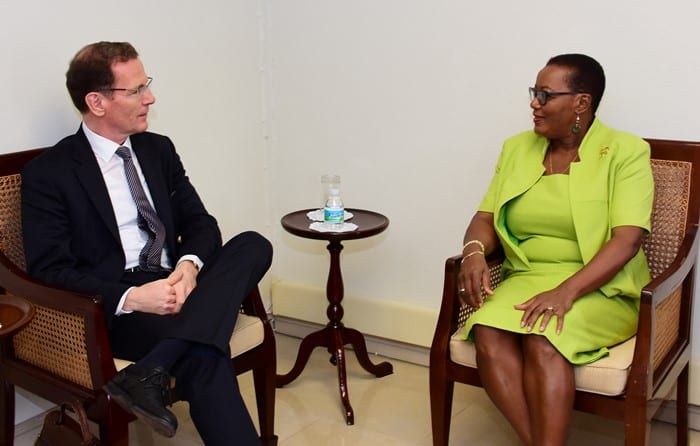 Minister of Foreign Affairs and Foreign Trade, Senator Maxine McClean and Director of the Americas of the European External Action Service, Roland Schaefer during their meeting yesterday. (C.Pitt/BGIS)

Minister of Foreign Affairs and Foreign Trade, Senator Maxine McClean, says it is time to “move from advocacy to action” when it comes to combating the impact of climate change.

Senator McClean shared her views this morning during a courtesy call with Director of the Americas of the European External Action Service, Roland Schaefer.

She told Mr. Schaefer that Barbados’ economy relied heavily on tourism for foreign exchange, and, looking at the island’s expenditure, most of it left the island to purchase fossil fuels.

Mr. Schaefer stated that he wanted to meet closely with all of the Foreign Ministers from across the region, so he could get to know them better, hear their concerns, and find a way to streamline their efforts to combat the global problem.

Other topics discussed were the range of security threats affecting not only the region but the world at large, including citizen security, terrorism, trafficking and migration, among others.