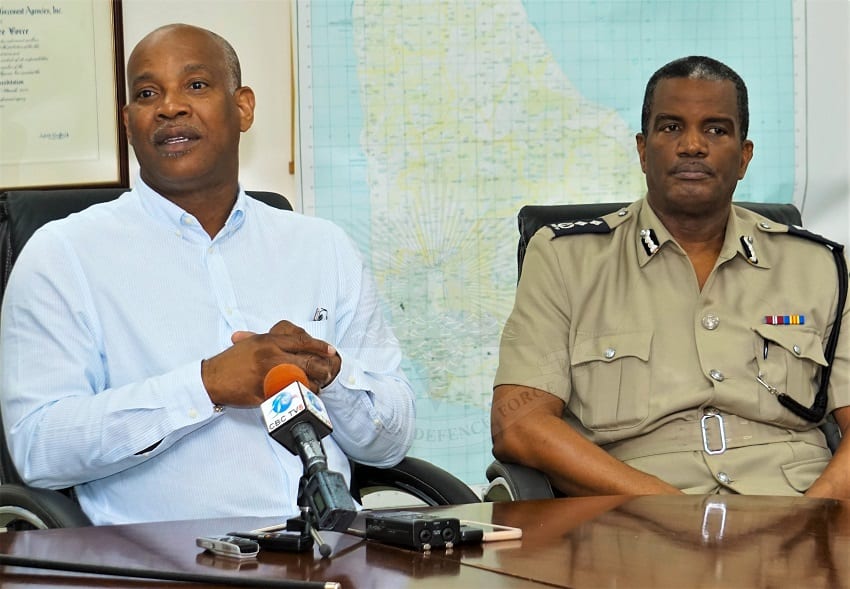 Attorney General, Dale Marshall speaking to the media during a press briefing at Police Headquarters today before going on a tour of several “hot spots” in Bridgetown. To the right is Deputy Commissioner of Police, Erwin Boyce. (Photo courtesy of the Barbados Defence Force)

An increase in the number of judges and additional resources for the Department of Public Prosecutions (DPP) are just some of the initiatives on the cards to assist with the growing incidents of crime across Barbados.

Attorney General, Dale Marshall, today took issue with the fact that Barbados had in some cases as many as 1,000 matters on indictment waiting to be heard in the High Court, some of which date back to a decade.

“If the criminal element feel they could do as they please and appear before the court and get bail and the next thing they hear about the case is five years from now, they would feel they could do what they feel like in our society. They say justice has to be swift [and] the end of that justice is the court system,” he stated.

He was at the time addressing members of the media at Police Headquarters before going on tour of “hot spots” in Bridgetown, accompanied by the High Command of the Royal Barbados Police Force and the Barbados Defence Force. He was also joined by Minister of Maritime Affairs and the Blue Economy, Kirk Humphrey.

Mr. Marshall said that a number of changes will be happening with the judiciary over the coming weeks, while the DPP’s office will be getting additional resources as Government moves to bring about efficiencies in a number of areas.

He disclosed that two new court rooms were installed at the Supreme Court Complex on Whitepark Road, St. Michael, to accommodate two new criminal judges. In addition, the Attorney General also disclosed that he was taking other initiatives to Parliament soon to increase the size of the judiciary.

“The Prime Minister has agreed to give us more judges. There are a number of things we can do. The burden is not only on the police. The police will do with the investigation and the arrest, but the judiciary also has to do its work. If [a person is] convicted, prison has to do its work as that is a place of punishment and rehabilitation, but the communities also have to do their work,” he maintained.