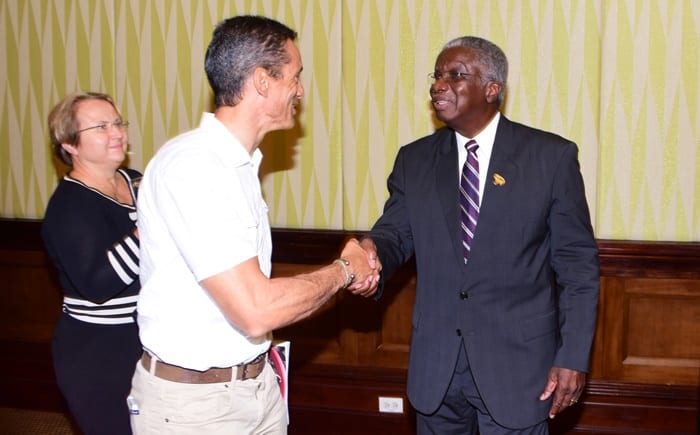 Government is committed to enhancing the economic viability of Barbados, says Prime Minister Freundel Stuart, who disclosed that plans for tourism development and other projects were in the pipeline.

He made the disclosure on Wednesday as he delivered the feature address at the January 2017 Business Luncheon of the Barbados Chamber of Commerce and Industry, at Hilton Barbados Resort.

Mr. Stuart told his audience: “These projects…constitute an investment of just over US$1 billion and will add 2,300 rooms to the inventory of Barbados, and, with the exception of the Sam Lord’s Castle Hotel, will involve private capital.

“It is expected that a further 14,000 jobs will be created directly and indirectly, and these projects therefore can, in the fullness of time, significantly reduce unemployment in Barbados.”

The Prime Minister added that there were a number of other projects which would bring much needed foreign and domestic investment into Barbados. He listed them as including the Republic Bank’s new headquarters; and the Ridge Middle Income Housing Development Project, where 750 houses would be constructed.

“These, along with Government’s public sector capital works programme for projects in water and sanitation upgrade; nursery schools expansion through the Maria Holder Memorial Trust; the resurfacing and upgrade of the Grantley Adams International Airport runway and the CAF and IDB road upgrade projects; should add a definite and strong injection of foreign project financing into the local economy,” he stated.

Mr. Stuart said growth was the ultimate solution to the fiscal challenges that had “dogged” the country since the current recession. He added that Government believed it could get the rate of growth above two per cent of GDP this year.

According to him, Government was very mindful that investment facilitation was critical for the successful implementation of all projects.

“We will therefore be paying considerable attention to the amount of time it takes for a project to receive all the approvals required for a successful execution, with a view to shortening the time being taken, without any compromise of the country’s best interests,” he assured.

The Prime Minister reminded his audience that last year he had designated Senator Darcy Boyce as the Minister with responsibility for business facilitation and noted that decision had already started to bear fruit.

He disclosed that Senator Boyce would also lead efforts towards the revitalisation of the Barbados Action Team concept within the Social Partnership, which came into being in 2012.

“The combined capacity of the National Productivity Council, NISE and the Office of Public Sector Reform will join the IADB’s Competitiveness Project to develop a planned and detailed approach to providing solutions to the roadblocks that have already been identified,” he disclosed.