Teenagers across the island between the ages of 14 and 18 may have increased access to the ITS for Teens Summer Programme next year, as the Ministry of Social Care seeks to expand the programme from just 13 to all 17 resource centres. 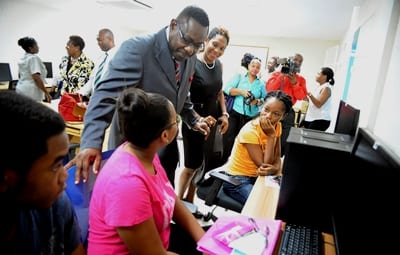 Mr. Blackett explained that when the programme was established in 2009, it was only offered at eight resource centres, until its corporate sponsor LIME came on board in 2010.

“LIME, now FLOW, understood what the Community Development Department was trying to accomplish in order to develop the youth of Barbados and willingly came on board in 2010 by offering full sponsorships for the ITS for Teens Programme… The programme since increased to 13 centres across the island and this year it catered to some 300 participants,” he stated, noting that there was an increase in male participants.

The Social Care Minister thanked the telecommunications corporation for its continued support, and said he was pleased to see corporate Barbados involved in the intellectual development of the youth.

This year’s programme featured a group project based on ‘Things Bajan’, to commemorate Barbados’ 50th anniversary of Independence, which Mr. Blackett explained allowed the students to bond and “gather new knowledge about the development of Barbados as a nation”.

The Social Care Minister congratulated the graduates for their participation and gave his assurance that the Ministry would continue to partner with companies such as Flow, to ensure Barbadians of all social strata could acquire the requisite computer skills to assist in their overall development, as well as the development of Barbados.

The ITS for Teens Summer programme came about when the Ministry of Social Care recognised that the Information Technology (IT) labs at the various resource centres were not being utilised during the summer months. The CDD then established the programme “to provide a meaningful summer pastime for teenagers”.