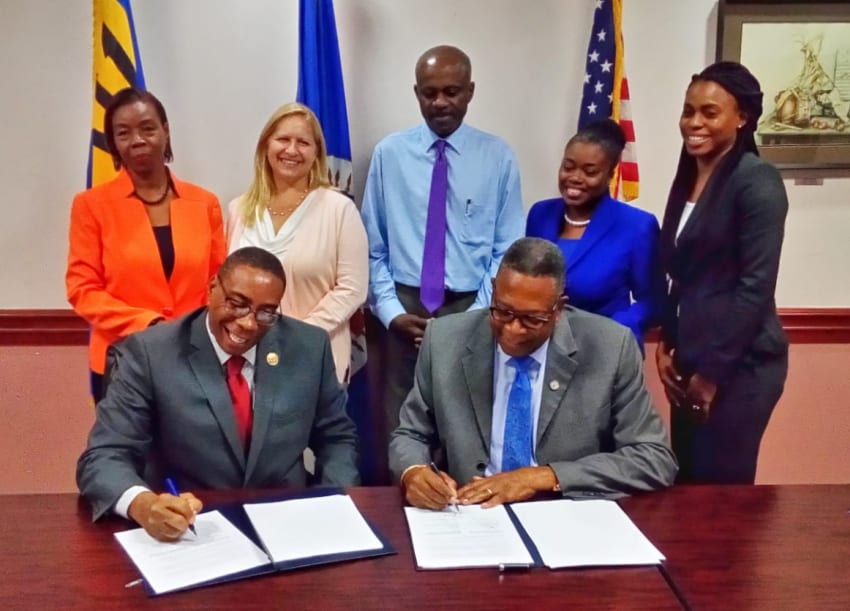 Barbados and the Organization of American States (OAS) now have a Memorandum of Understanding (MOU) on the cultural heritage project Enhancing the Framework for the Development of a Heritage Economy in the Caribbean.

In signing the document, Minister King explained that the project, which is funded by the United States Government, would result in numerous benefits, not only for Barbados, but for the region as a whole.

He disclosed that Barbados would join the other 14 Caribbean countries in the implementation of Component 2 of the project, which would assist in the development of national inventories of cultural heritage.

“To us in the Caribbean, cultural heritage defines who we are as a people.  Moreso, it is a valuable resource that can give us a competitive advantage internationally in the tourism sector, and in the growth of the cultural economy. Heritage worldwide is an income generator. Unfortunately, we in this region are yet to fully grasp the economic potential of this resource. This project promises to be one of the most significant initiatives in the region aimed at protecting, promoting and preserving our rich heritage. As a region, we must preserve, protect and leverage our resources in order to remain competitive and to retain our identity,” Minister King said.

Pointing to the fifth OAS Meeting of Ministers of Culture and Highest Appropriate Authorities in Washington DC in 2011, Mr. King recalled that the key priorities identified then were the promotion and protection of cultural heritage.  He noted that since that time many countries in the region had taken steps to preserve and protect their cultural heritage.

He explained that this project would ‘represent a paradigm shift’ away from the traditional list of buildings that currently exist in the region that have a more Eurocentric focus.

He said the focus would now be on heritage that is representative of all people of the region and would allow communities to have a say in identifying places and objects that are of significance to them.

The Culture Minister acknowledged that there were a number of deficiencies in the current listing system, including the fact that there were no national comprehensive lists of sites of memory, such as slave burials sites, monuments, lighthouses, fishing villages, plantation houses, clusters of chattel houses and homes of national heroes.  All of which he noted, are important cultural heritage resources. He pointed out that the formulation of a national registry would address those concerns.

“The development of a national registry will necessitate a change in our national cultural policy. It will require a review of the relevant laws governing the preservation of heritage that now sits within various governmental and non-governmental agencies.  There are some regional best cases that we will review, for example, Bahamas has amended their legislation to provide incentives to property owners and developers to encourage them to place their properties on the list,” he said.

This project is expected to enhance Barbados’ knowledge base on heritage through analysis, capacity building and the development of tourism models.  It will also serve as a means to enhance the Ministry of Culture’s programmes to educate communities about the importance of their heritage to national identity and development.