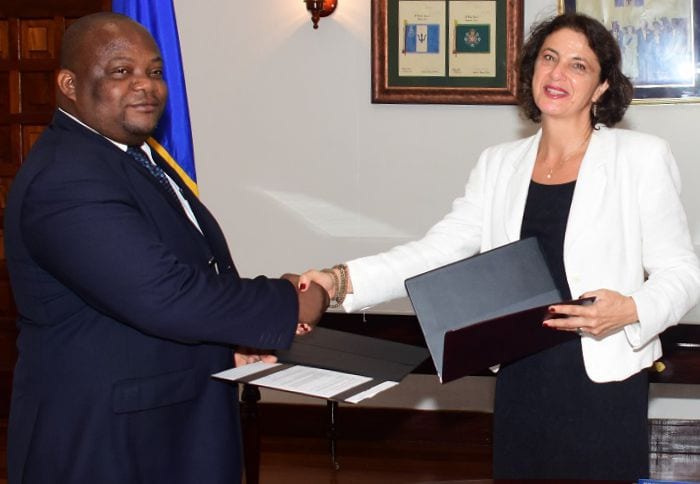 Acting Permanent Secretary, Defence and Security, Timothy Maynard, exchanging documents with Ambassador of the European Union, Daniela Tramacere, following the signing of the MOU on the implementation of the Seaport Cooperation (SEACOP) Programme today. (C.Pitt/BGIS)

Government has signed a Memorandum of Understanding (MOU) on the implementation of the Seaport Cooperation (SEACOP) Programme, which aims to train and equip inter-agency units to identify, search and interdict all forms of maritime trafficking.

Acting Permanent Secretary, Defence and Security, Timothy Maynard, today signed the document on behalf of Government, in the presence of Ambassador of the European Union, Daniela Tramacere. And, Mr. Maynard explained that the MOU would promote closer maritime ties among the police, immigration, customs, the Coast Guard and their international partners.

“According to the MOU, SEACOP’s goal is to strengthen the capacity of participating countries to combat illicit maritime trafficking and associated criminal networks. This will be done mainly through modern training techniques and maritime intelligence sharing,” he explained.

He disclosed that team members had already completed most of the initial training, which was expected to be refreshed on a regular basis. He thanked the European Union and the Spanish international cooperation agency Fundación Internacional y para Iberoamérica de Administración y Políticas Públicas (FIIAPP), in particular, for the continuing interest they have shown in helping to promote the safety, security and stability of Barbados and the wider Caribbean region, through international partnerships such as SEACOP.

Mr. Maynard stressed that Barbados and the Caribbean had forged many strong bilateral, regional and international alliances over the years as they sought to play their part in maintaining security in this part of the world, as well as globally.

He continued: “For you can be sure that while we are banding together, the regional and international criminal networks are also forging their ties of friendship and cooperation, with the focused intent of creating chaos and mayhem, destabilising our way of life and destroying our children’s future through drugs, crime and violence.”

Ambassador Tramacere said she knew Barbados and the Caribbean were doing their utmost to fight the increasing illegal activity that had been plaguing the region.

She stressed that the European Union was committed to assisting this region, pointing out that no individual country could fight international organised crime. She underscored the importance of both regions strengthening their cooperation to gather and exchange information, especially since the sharing of intelligence was critical.

The signing of the MOU signals the official joining of Barbados with 25 countries in Africa, Latin America and the Caribbean in the implementation of SEACOP, which improves the capacity of law enforcement agencies in monitoring maritime trafficking and detecting illicit maritime cargoes.

A press release from the European Union explained that with SEACOP’s “provision of access to databases, as well as regional and inter-regional networks of partners, it is designed to move law enforcement towards an intelligence-led approach that will help reduce the trafficking of cocaine”.

SEACOP is implemented on behalf of the European Union by FIIAPP.