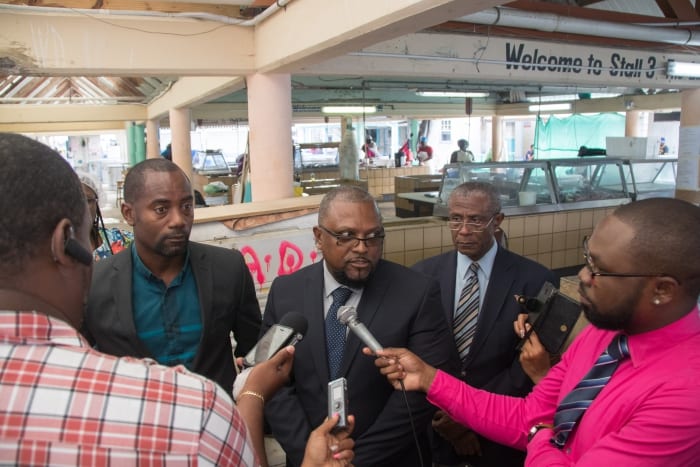 Ministry of Agriculture and Food Security, Indar Weir speaking to the media following a tour of the Bridgetown Fisheries Market yesterday. He is joined by Minister of Maritime Affairs and the Blue Economy, Kirk Humphrey (left) and Deputy Speaker of the House, Gline Clarke (right). (S. Maughan/BGIS)

Government will do everything in its power to bring the Bridgetown Fisheries Market up to standard.

Minister of Agriculture and Food Security, Indar Weir, made this pledge after touring the Complex on Wednesday.

Mr. Weir, accompanied by Minister of Maritime Affairs and Blue Economy, Kirk Humphrey and officials of the Ministry of Agriculture and Food Security, toured the market to gain firsthand knowledge of conditions there.

The Agriculture Minister said he observed several issues at the complex, namely the physical settings; decrepit boats occupying space on the jetty; and the need for a crane to remove boats from the water when storms or hurricanes were approaching.  He noted that they were some areas that could be handled within a short time and others that would require mid-term planning.

With regards to the physical setting, Mr. Weir stated: “I see opportunities for us to be able to intervene and fix the things that are there before us, in terms of keeping the stalls clean; making sure that we introduce legislation that is prepared to get us up to our phytosanitary goals and then making sure that we get the packaging unit into proper use so that the shipping of tuna can take place in the environment is required.”

He appealed to the owners of the decrepit boats to take ownership of their property and do what was necessary to either repair them or remove them from the jetty, so that the space could be used more productively.

Acknowledging that it was Government’s responsibility to provide suitable conditions for fisher folk, both Ministers agreed to meet over the next few weeks to determine how to address the issues at the Bridgetown Fisheries Complex.