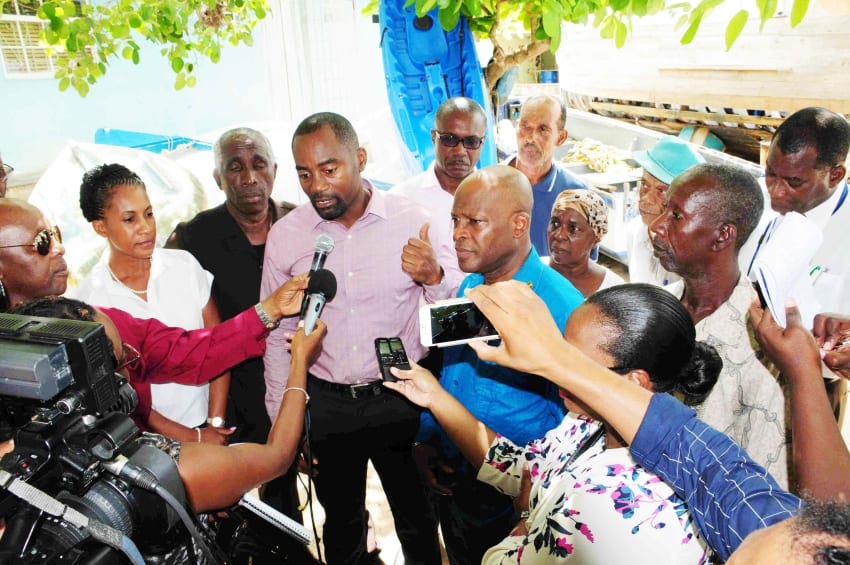 Minister of Maritime Affairs and the Blue Economy, Kirk Humphrey, speaking to the media following a tour of the Millie Ifill Fish Market in Weston, St. James yesterday. He is joined to Minister of Home Affairs, Edmund Hinkson (to Mr. Humphrey’s left), government officials and fisherfolk. (B.Hinds/BGIS)

Government is moving to protect Barbados’ fish stock through the improvement of the existing marine protected area and the establishment of another.

Noting that it was “almost embarrassing” that 80 per cent of the fish used in Barbados was imported, Minister of Maritime Affairs and the Blue Economy, Kirk Humphrey, made it clear that things had to change as the country pursued a new fishing industry.

He was speaking after a tour of the Millie Ifill Fish Market in Weston, St. James, accompanied by Permanent Secretary, Esworth Reid and other officials.

“There is a lot of overfishing in Barbados; [and] there has been fishing in areas where we shouldn’t fish.  We fished out the fish and left the lionfish, which is a predator and is killing all the other fish…,” he said.

However, the Minister noted that he would be taking a paper to Cabinet soon to address improvements at the Folkestone Park and Marine Reserve, while there are also plans to make Carlisle Bay a marine protected area.

This move, he said, would allow the fish and coral reefs in the area to restore themselves and start to regenerate to improve the island’s fish supply.