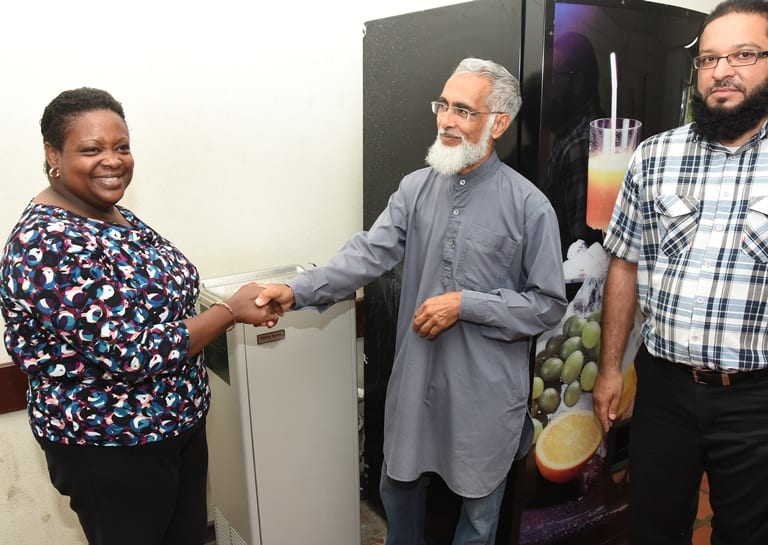 The Winston Scott Polyclinic is the recipient of a brand new water cooler, thanks to the philanthropic efforts of the Barbados Muslim Association.

The donation formed part of the Association’s outreach programme, coordinated to assist the Muslim and wider Barbadian community through a series of charitable initiatives.

During a presentation at the polyclinic on Jemmotts Lane, Medical Officer of Health, Dr. Ingrid Cumberbatch, expressed her thanks for the gift and encouraged supporters to think beyond medical contributions.

She stated: “You came, you saw a need and you addressed that need and we really appreciate that. All donations don’t have to be for medical equipment and if you see a need and you think that you can address that need, just go through our procedures and we are usually very amiable.”

Executive Member of the Barbados Muslim Association, Abdul Mehter, explained that a few months previously, one the members of his community was attending the polyclinic and noticed its water cooler was not functioning.

He said that after the health facility’s plight was drawn to the association’s attention, it provided the funds to finance the purchase of the cooler.

Mr. Mehter added that the Muslim Association had also made a “substantial” donation to the Queen Elizabeth Hospital; provided food hampers for the needy; and is currently engaged in a joint programme with the Barbados Vagrants and Homeless society to feed homeless persons on a monthly basis.