NAB Commended For 36 Years Of Service 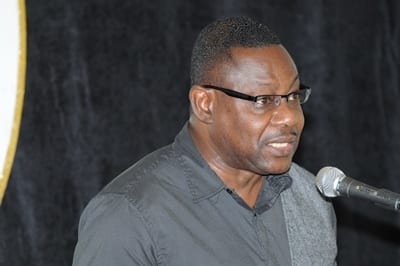 Minister of Social Care, Steve Blackett says the National Assistance Board (NAB) has had a positive impact on society for the past 36 years, but cautions it, not to fall victim to “complacency and declining standards”.

Mr. Blackett was speaking at the Board’s 36th Anniversary service, when he lauded efforts to improve the quality of life for elderly persons, but warned that complacency could negatively impact service delivery to individuals and families, as well as harm its reputation.

Mr. Blackett said that as a result of the effective leadership of previous leaders and administrators, the organisation evolved from an Advisory Board in 1969, to an independent state social service agency, delivering services directly to beneficiaries.

The Minister noted that he was therefore pleased to acknowledge the NAB’s policies, programmes and other services which greatly contributed to the social development of Barbados.

“We honour our workers, particularly our retirees who have been a valuable asset to the organisation. We recognize the contribution of our frontline workers; particularly our home care workers in the communities, who have worked in challenging circumstances and sometimes in depressing and arduous conditions as they deliver care to elderly recipients in their homes,” he stated.

Minister Blackett made special mention of the Jorris Dunner Elderly Day Care Centre, which was opened last December to provide a safe and stimulating environment for elderly persons, as well as the Clyde Gollop Night Shelter for Homeless Men which the Minister explained has been operating at its maximum capacity for the past year.

The Social Care Minister stated that the Board’s programmes and services were not geared solely towards the development of its clients, but also its workforce.

“Continuous and relevant training in areas such as Alzheimers, HIV/AIDS and Health and Safety issues ensures that the agency has a cadre of workers who are equipped not only to deal with the changing needs and behaviours of elderly recipients, but that they also acquire skills and knowledge which positively impact their personal development,” he shared.

Mr. Blackett noted that select workers from across the agency had also benefitted from a 10 week training session in Retirement Planning which focused on finance, as well as the mental and physical components.