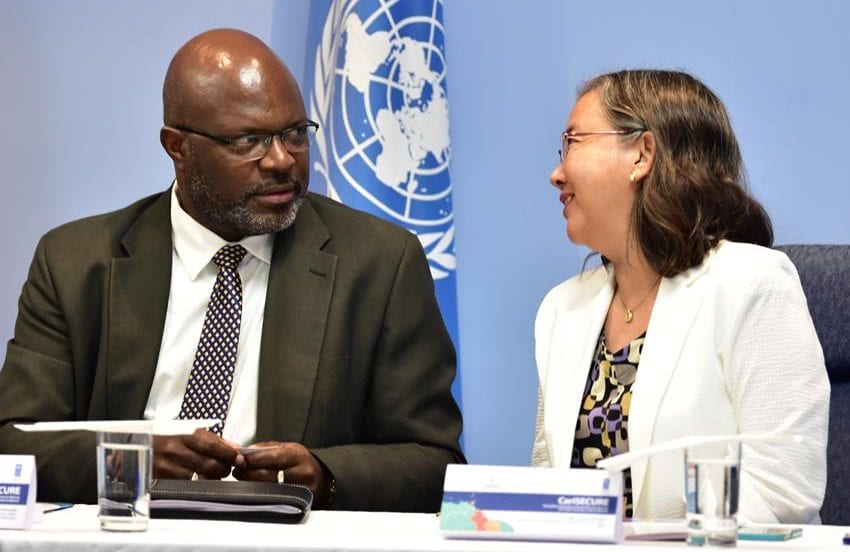 Attorney General Adriel Brathwaite and Deputy Resident Representative of the United Nations Development Programme for Barbados and the Organization of the Eastern Caribbean States, Chisa Mikami, chatting at the launch of the national (CariSECURE) task force. (C. Pitt/BGIS)

Barbados has established a national task force under the United States Agency for International Development’s (USAID) Citizen Security in the Caribbean (CariSECURE) project, designed to provide crime solutions through a data-based approach.

Delivering the feature address, Attorney General and Minister of Home Affairs, Adriel Brathwaite, endorsed the initiative and noted that access to reliable and accurate information was imperative in the fight against crime. He also expressed the view that CariSECURE would be beneficial to Barbados and the other Caribbean countries in which it operates.

“I’m particularly pleased that we’re moving this, not only in Barbados but across the region at a time when… I saw part of a report which suggested that the region had a higher murder rate than war-torn zones. We were known as a region of peace and beauty …and, hopefully from our scientific/data approach, not only Barbados but indeed the region can tackle this vexing issue of violent crime,” Mr. Brathwaite stated.

Deputy Resident Representative of the United Nations Development Programme for Barbados and the Organization of the Eastern Caribbean States, Chisa Mikami, explained that the formalisation of the task force paved the way for the adoption of a set of customised strategies called the Barbados Citizen’s Security Toolkit, intended to address citizen security data management, analysis and monitoring.

“The endorsement of the Barbados Toolkit, which includes a guidance note and a data sharing agreement, will allow Barbados to develop policies and strategies based on hard, reliable data,” she noted, adding that CariSECURE, if requested, was willing to support Barbados in developing a Citizen Security Policy that would focus on addressing the root causes of violence and crime.

The launch also saw the signing of key documents related to the toolkit – Guidance Notes for Citizen Security Data Collection and Dissemination, Terms of Reference for the National Task Force and an Information Sharing Agreement – by the Attorney General and key criminal justice stakeholders, including the Royal Barbados Police Force, the Barbados Prison Service, the Criminal Justice Research and Planning Unit, the Director of Public Prosecutions, the Probation Department and the Government Industrial School.

CariSECURE, one of the three components of the USAID’s Youth Empowerment Services project, is designed to strengthen citizen security throughout the Caribbean. Its objective is to create and implement effective policies that are dependent on the availability and use of reliable citizen security data.