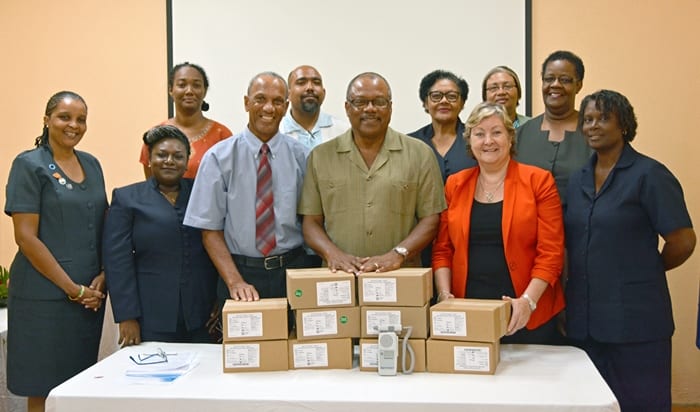 A national approach to the care of the diabetic foot is necessary if there is to be a significant reduction in the 200 amputations performed in Barbados annually.

This assertion came from Chief Executive Officer of the Maria Holder Diabetes Centre for the Caribbean, Cally Boyea, last Monday, as he addressed a ceremony at which the Centre donated 11 Vascular Doppler Scanners to the Ministry of Health for use in polyclinics island-wide.

Mr. Boyea told the audience that in pursuit of this approach, the Centre was looking into ways to further improve its association with the Surgical Department at the Queen Elizabeth Hospital.

He explained that once someone with diabetes developed a foot wound or ulcer, they were at a high risk of infection, limb loss, loss of productivity and eventually depression. The healing of such a wound, he said, was an uphill battle requiring the input of several care providers.

Mr. Boyea submitted: “No one practitioner or institution can solve this problem. It requires the concerted effort of primary, secondary and tertiary care providers to create a cost-effective model of medical care. The polyclinics or we at the Maria Holder Diabetes Centre cannot do this alone. What we are talking about is a holistic approach.”

Of particular concern, he said, was the proportion of major amputations. “Although I am not a medical expert, I have been made to understand this may be due to late presentations which are accompanied by high rates of poor blood supply to the legs and feet,” he added.

Noting that early observations and detection in patients at the Centre had led to a significant reduction of chronic cases, Mr. Boyea gave the assurance that any effort which supported early, ongoing and effective screening of the diabetic foot within the polyclinics would be supported by the Centre.

Since its opening in 2014, the Maria Holder Diabetes Centre has managed nearly 600 patients referred from polyclinics across Barbados through an agreement between the Centre and the Ministry of Health.

The agreement makes provision for patients, who have either been newly diagnosed, have poorly controlled diabetes or a foot ulcer, to be referred for a six-month period of comprehensive diabetes care and self-management education.

Mr. Boyea said that the Centre saw its role as pivotal and integrative.

“We recognise that multiple care provider involvement, self-management education, and support in various forms, give persons with diabetes the best chance of maintaining good management for life, as normal a life as possible and the avoidance of complications,” he added.