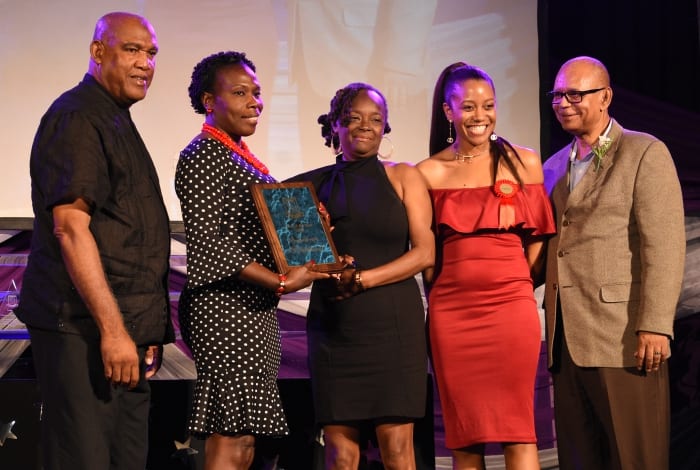 Several staffers were recognised last Saturday night when the National Insurance Scheme (NIS) hosted its 51st Anniversary Gala and Awards ceremony at the Lloyd Erskine Sandiford Centre. The event was held under the theme: Contribute Today to Secure Your Future.

Commending the awardees, Minister of Labour and Social Partnership Relations, Colin Jordan, explained that the GEM rewards and recognition programme was built on the philosophy that without employees’ loyalty, hard work, dedication and commitment to service, the Department would be unable to fulfil its mission.

The mission, he added, aimed to: “To provide timely social security benefits through the efficient collection and management of funds by a highly motivated and customer-oriented staff”.

Launched in 2005 and re-fashioned in 2016, the programme depicts gemstones to reflect the qualities in staff performance. Moreover, it recognises the value of each employee and each person’s role in ensuring the organisation was successful in reaching its goals and ultimately rewarding excellence.

While acknowledging that the NIS promoted a culture and an attitude of excellence, leading to individual development and organisational success, Mr. Jordan said recognition was also given to employees who demonstrated quality in performance, community spirit, teamwork and academics.

As he urged continued excellence on the job, he told the awardees: “I want to encourage all of you to keep reaching for the stars as you continue to give valuable service to this important institution. In doing so, I implore you to remember the importance of continuously striving for excellence and maintaining high standards of customer service in your respective departments to ensure customer satisfaction, even if the customer is a hostile customer.

“Additionally, you should motivate each other to increase productivity and efficiency, to ensure the success of the NIS. You should always be guided by your corporate motto and vision to be a “caring, efficient and reliable social security provider for all customers”.

The Employee of the Year Award went to Renee Waterman, while the Team of the Year was the Compliance Section made up of Eric Niccolls, Cynthia Lynch, Haizen Crawford and Lana Bynoe.