Government is fighting back against the harmful effects illegal drugs can have on society, families and individuals.

However, it will not be making critical decisions blindly. In fact, through the National Anti-Drug Plan 2017 to 2021, much of Government’s future decisions as it relates to legal and illegal drugs, including whether or not to legalise marijuana, will be informed by research and evidence. These were among the points discussed during a recent consultation of national stakeholders at the Savannah Hotel.

The plan was approved by Cabinet last year and will be implemented by the National Council on Substance Abuse (NCSA), with support from the Inter-American Drug Abuse Control Commission (CICAD) of the Organisation of American States.

Drug Education Officer at the NCSA, Wendy Greenidge, said a key element of the plan is its governance structure, which would guide the process forward. That structure, she said, includes an Oversight Committee, which will be responsible for the implementation of the National Anti-Drug Plan, and the coordination and collaboration between the stakeholders.

Ms. Greenidge explained that the Oversight Committee would be chaired by the Minister of Home Affairs, and would include CICAD’s Commissioner, the Chairman of the Board of the NCSA and the NCSA’s Manager.

She added that the National Anti-Drug Plan Unit also formed part of the governance structure, and would be based at the NCSA. “We [the NCSA] will provide secretarial support to you. We will meet with each of you to determine the way forward,” Ms. Greenidge told the stakeholders gathered.

The Unit will be responsible for preparing research papers and reports; sourcing information, data and analysis on the plan’s implementation; and ensuring that agencies met deadlines. However, the Drug Education Officer stressed that for the new plan to be successful, there must be buy-in from across the various sectors.

As a result, she said, a Multi-Sectorial Committee would also form part of the governance structure.  It will cover six thematic groups: institutional strengthening; demand reduction; supply reduction; control measures; international cooperation; and monitoring and evaluation.

In addition, Ms. Greenidge noted that some of the key benefits of the National Plan included the establishment of an effective inter-agency network to enable communication, monitoring and evaluation; an improved legislative framework with respect to the areas outlined in the plan; and a reduction in illicit importation, use and misuse of drugs (legal and illegal), alcohol and other narcotic substances. 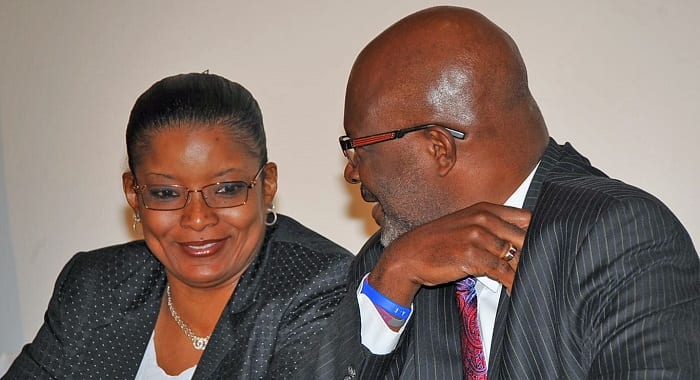 Manager at the National Council on Substance Abuse, Betty Hunte and Minister of Home Affairs, Adriel Brathwaite, in discussion at the recently held consultation of national stakeholders at the Savannah Hotel. (C.Pitt/BGIS)

Manager at the NCSA, Betty Hunte, noted that the five-year National Anti-Drug Plan sought to address all areas of drug control, from prevention to international cooperation. Financing, she also stressed, would be an important factor to consider.

“At this point in time, there is no one agency which has been given money [towards] the Drug Plan…. The NCSA is trying to approach the Ministry of Finance to have them include an item called the National Anti-Drug Plan, so as we go forward each agency would have that built into their budget…,” she explained.

Meanwhile, the Plan already has the full backing of Minister of Home Affairs, Adriel Brathwaite, who reiterated that policymakers had a responsibility to ensure that whatever decisions were made as it relates to drug use, were done to the benefit of the majority of citizens.

“So, for the whole issue of marijuana, let us examine it…. We cannot and should not jump on any bandwagon because of loud noises,” he said, adding that the Plan was about ensuring that Barbados had the correct governance structure in place going forward.

The Minister said he was convinced that there was a significant cost to the country in the loss of productivity, injuries and money spent at the Queen Elizabeth Hospital stemming from issues related to drug use.

OAS Representative to Barbados, Ambassador Francis McBarnette, said: “The National Anti-Drug Plan is being implemented in a very complex and ever changing environment where, apart from the old challenges, new potent synthetic drugs are appearing on the market every day, and where organised criminal networks are also adapting strategies to grow and diversify the market.”

He added that national drug plans could not be static, but would only be effective if they encouraged collaboration, cooperation and joint action at all levels, and adapted to rapidly changing situations. “All stakeholders in Barbados must become involved and engaged in that discussion and bring their experience and perspective to the table,” he said.

Noting that the OAS had provided support to the NCSA over the years, Ambassador McBarnette said his agency was presently giving consideration to a request for assistance to conduct a survey this year on drug use in primary schools.