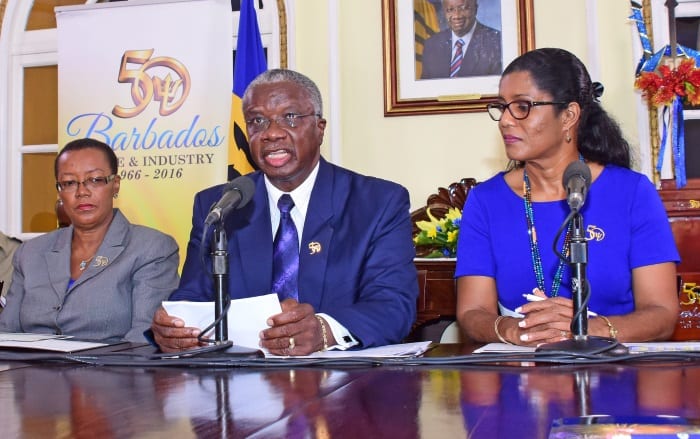 Prime Minister Freundel Stuart speaking at today’s press conference at Ilaro Court. To the left is Chairperson of the National Committee for the 50th Anniversary of Independence, Senator Maxine McClean while to the right is Deputy Chairperson, Senator Dr. Esther Byer Suckoo. (C.P:itt/BGIS)

A national values assessment is being conducted to ascertain the views of Barbadians to questions posed by Prime Minister Freundel Stuart as to what features of Barbadian life should be reclaimed, retained or discarded as quickly as possible.

Mr. Stuart made the announcement today during a press conference to discuss the 50th Anniversary of Independence activities at Ilaro Court. He said the research was being carried out by The University of the West Indies, through the Sir Arthur Lewis Institute of Social and Economic Studies.

Entitled: Barbados At 50: The Barbados National Values Assessment 2016, the Prime Minister further disclosed that some preliminary results would be made public in November.

“That primary research study will inform us of the views of the population in relation to where we are as a people at this juncture of our 50th anniversary as an independent nation.  It is my hope that this seminal research will be the platform for a series of in-depth studies that will inform our policy formulation, development and implementation over the next 50 years and beyond,” he explained.

Mr. Stuart stated that as the country continues to make the transition to real independence, Barbadians must take the lead in shaping their future and that of their nation.

“What we are in the next 50 years will depend on our vision, our values, our resolve, and our industry.  We must be willing to make sacrifices in some areas and having made them, there must be an environment that allows us to benefit from the sacrifices we have made. Achieving this will be no simple stroll in the park,” he stressed.

He noted that the country was facing significant challenges which were the result of internal and external factors.  “We have been working assiduously to address our internal challenges to ensure that Barbadians maintain the high standard of living for which we are so well known.  To date, there have been successes in some areas, and we continue to strive to achieve further successes in those that we have not yet overcome,” he said.

The Prime Minister added that the evolution of the journey since 1966 had been marked by triumphs and challenges, yet citizens did not allow themselves to be overwhelmed.  Rather, he pointed out that they had confronted the challenges with courage and resolve, ever confident in their resourcefulness and resilience.