Minister of the Environment and Drainage, Dr. Denis Lowe and General Manager of the National Conservation Commission , Keith Neblett, congratulating some of the appointed NCC workers yesterday. (C.Pitt/BGIS)

The National Conservation Commission has appointed 103 workers with effect from April 1.

Of this number, only eight persons were hired since the NCC’s retrenchment exercise three years ago, seven of whom were retrenched lifeguards.

Minister of the Environment and Drainage, Dr. Denis Lowe, sought to set the record straight yesterday following a meeting with newly appointed workers and the NCC’s Board of Management at the Almond Bay Caterers.

“Since the retrenchment, we lost 87 workers due to retirement, death or other means. We took a position in concert with Government’s position not to hire additional persons.

“… We have only hired eight people so the story that is being told is untrue that the Commission has hired 170 people. That is a myth…,” he emphasised.

In addition, Dr. Lowe stated that the NCC had satisfied all its obligations to retrenched workers, with many of them even receiving letters of recommendation from the NCC to pursue and chart new career paths.

He commended the newly appointed workers for the standard of work they produced, and urged them to continue to uphold the image of the 46-year-old institution.

Noting that all the persons appointed met the qualification requirements, the Minister said the NCC’s Board of Management used the opportunity to compliment the workers for the good work they were doing, and to address the issue of productivity and best practices.

“The Commission took the time to explain that there are opportunities [and] that if they identify an area where there are skills they wish to acquire, that they would consult with the NCC and the opportunity would be made available to them,” he disclosed.

Noting that NCC was no longer a “rake and scrape institution”, Dr. Lowe said it had transformed into a “very sophisticated science-driven organisation”, where there were new features, including the Tissue Culture Lab, and the apiary.

He added that the NCC also played a critical role in the response to Barbados’ climate change issues, and benefited from the generosity of private sector institutions, which had come on board to assist with the creation of new recreational parks, as well as the overhauling of the Folkestone Marine Park.

“It is because the NCC has built out its programme to the extent that the public now sees an organisation where there are so many features other than what its 46-year history dictates…,” the Minister noted. 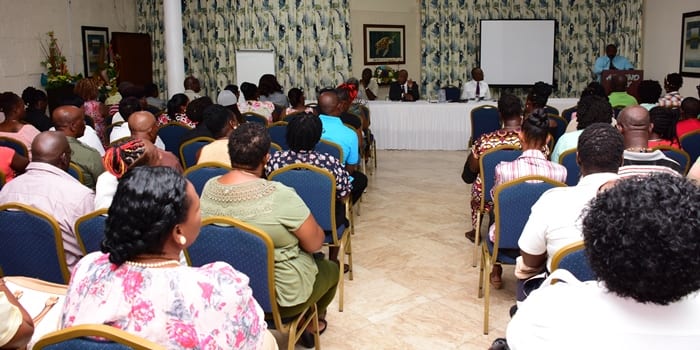 Chairman of the NCC, Earl Yarde, also encouraged the workers to give of their best at all times and take pride in themselves as employees.

Meanwhile, General Manager, Keith Neblett, also encouraged them to adopt good work ethics and to always give of their best.

During yesterday’s meeting, some workers expressed their gratitude at being appointed and gave the assurance that they would continue to strive for excellence.