NCF Will Continue To Collaborate 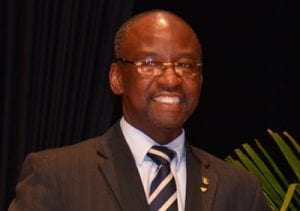 The National Cultural Foundation (NCF) will continue to collaborate with its various stakeholders to choose the Crop Over awardees yearly.

This assertion came from Minister of Culture, Stephen Lashley, during an interview on the sidelines of the Crop Over Opening Gala and Ceremonial Delivery of the Last Canes, at the King George V Memorial Park last weekend.

Stating that this move was in order to have a “truly all-inclusive arrangement” where the best persons are selected in the most transparent way possible, Mr. Lashley pointed to the process of awarding lone female electrician, Francine Belgrave and Pan Boiler, Cedric Eastmond, the Crop Over 2017 Awards   for the Most Outstanding Sugar Worker (Factory).

He noted that the NCF had consulted extensively with the relevant parties in order to create this particular award and choose the winners.

“Going forward, what will happen is that that collaboration will continue. The NCF will not on its own come up with who the awardees are, it will do it through a consultative approach,” Mr. Lashley assured.

Earlier this year, the NCF announced that it would dissolve the tradition of awarding one outstanding male and female cane cutter the title of the King and Queen of the Crop.