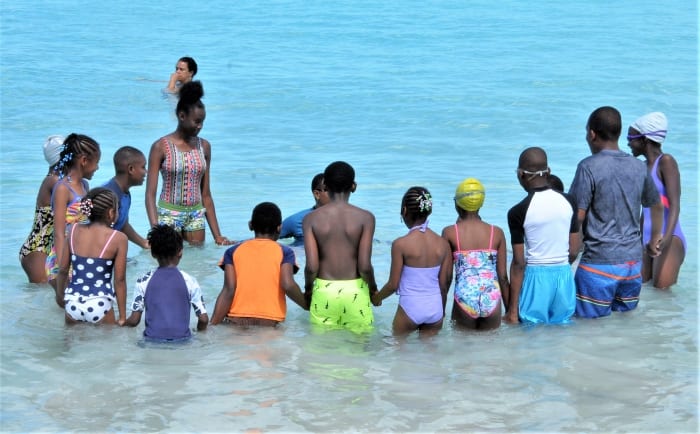 Approximately 100 Barbadians now have a skill that they can take with them throughout their lives – the ability to swim.

They took part in this year’s Operation S.O.S – Save Our Selves – programme, which is held every summer by the National Conservation Commission’s (NCC) Lifeguard Service, for persons 10 years old and over.

The seven-week programme was held at Browne’s Beach from July 16 to September 5. Twenty fire cadets also took advantage of the training.

During a recent closing ceremony, Chairman of the NCC, Ramon Alleyne, spoke about the high level of training and dedication of those who were part of the local Lifeguard Service.

“I wish the public to note that six members of staff of the Lifeguard Service, including Supervisor, Rawle Eversley, and Chief Lifeguard, Ken Mayers, recently participated in training to the levels of First Aid and Lifesaving Instructor conducted by Caribbean Development Coordinator of the Lifesaving Society of Canada, Patrick D’Almada, who travelled to Barbados during the period June 17 to 23, at the request of the Commission to conduct the training.

“This training and certification will allow these individuals to assist the Lifeguard Instructor in conducting training for lifeguards, and it is expected during the period June 2018 to June 2019, that the successful instructor candidates will teach a full training course to existing lifeguards or new recruits, and prepare students to be certified,” he disclosed.

Additionally, the NCC Chairman said that veteran lifeguard, with 20 years’ service, Terrance Hinds, recently received the prestigious Mountbatten Medal by the Royal Lifesaving Society Commonwealth.  The award is an annual award made for the most gallant rescue or rescue attempt in the previous year.

Mr. Hinds rescued three Canadians, including an elderly couple, who got into difficulty off Folkstone Beach, St. James, over a year ago. “Terrance’s knowledge, judgement, skills and fitness prevented the loss of life on that day and he truly lived up to the motto of the Lifeguard Society ‘whomsoever you see in distress, recognise in him a fellow man’,” Mr. Alleyne said.

The Chairman deemed this year’s Operation S.O.S programme a success, and thanked participants as well as those lifeguards who provided valuable support and assistance.