The Governments of Barbados and Canada today signed a new Air Transport Agreement which is envisaged to not only increase airlift and long stay visitors in both countries, but also give aircrafts “the flexibility to operate without directional or geographical limitations”.

Senator McClean explained that while an air services agreement was signed between Barbados and Canada in 1985, several developments occurred which necessitated a review of the previous agreement.

“We have come here today because the Governments of Barbados and Canada embarked on, and successfully concluded, an agreement to replace the original air services agreement,” she pointed out.

The Foreign Minister added that it was “no secret” that Canada was the island’s single, largest, source market for international business and the agreement was, therefore, an essential instrument to facilitate this.

“The evidence is there that there is a renewed commitment on both our parts to ensure not only that our visitor arrivals increase, but also to facilitate the business transactions that take place between our countries,” she stated. 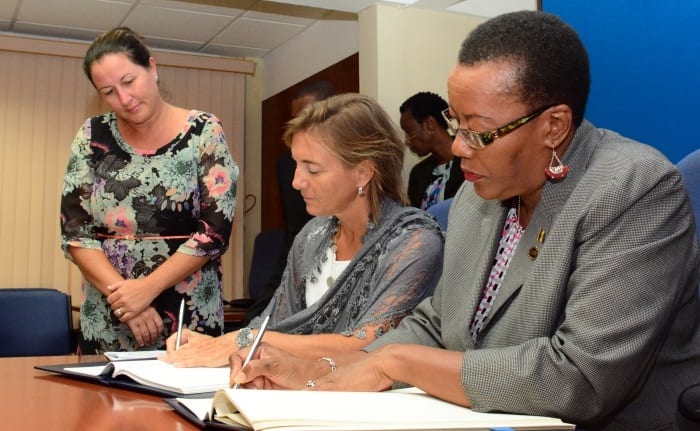 High Commissioner Legault agreed with Senator McClean that air connectivity was crucial for facilitating trade investments between the two countries.

“In 2013, 50,000 people came just with Air Canada and in three years we were able to increase that to 81,000 people… and it’s increasing every year. So, an instrument like this is essential to make sure there are no barriers between our countries,” she stated.

The envoy remarked that Canada’s exchanges with Barbados were “extremely important”, and the new agreement was just another example of how both countries continued to collaborate to increase mutual growth.