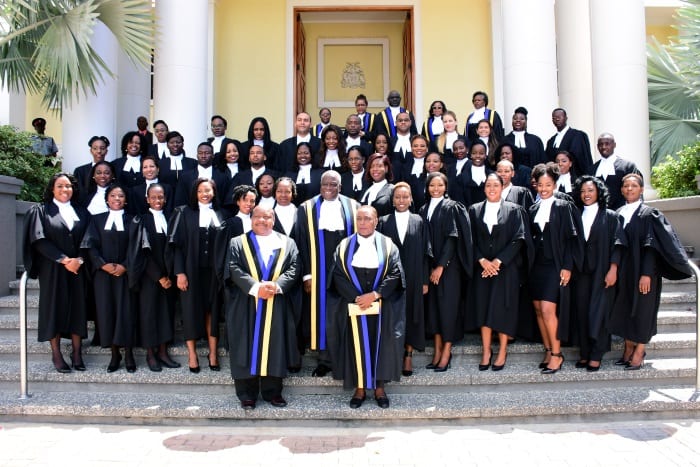 The 45 new attorneys admitted to the Bar today have been urged to play their part in reducing the backlog in the court system.

In welcoming the new attorneys, Chief Justice, Sir Marston Gibson, highlighted the areas of Alternative Dispute Resolution and Mediation, as being able to greatly assist in reducing the court’s backlog.

“You stand at the threshold of the fight against backlog and delay, and I encourage you to consider this seriously,” he said.

He explained that Barbados’ Court-annexed Mediation Pilot project was launched in the High Court and the Magistrates’ Courts, which meant that cases filed would no longer necessarily entail a judicial decision, but could have a negotiated resolution with the aid of a mediator or mutually agreed arbitrator.

“The Caribbean as a whole has begun to move in that direction as a way not only of getting rid of the backlog which plagues all of our courts, but of preventing it from recurring once we have seen the back of it,” he stated.

In addition, Sir Marston also encouraged the new attorneys to get involved in the practice of criminal law and assist in reducing the “huge backlog of pending criminal cases” in the court system.

However, despite their significant achievements, Sir Marston, took the time to remind the new attorneys that they still “have not arrived”, and of general expectations related to their conduct.

“You have run through the gauntlet of written assignments and exams.  But in a very real sense, you have only just begun.  You are only now crossing the threshold and putting your foot in the door… because whether you term it a graduation or an admission, it is but the beginning of a career,” he explained.

He encouraged them to take advantage of upcoming training exercises being conducted by the Barbados Bar Association in the norms of behaviour and practice at the Bar, and training in writing skeleton arguments or briefs.

“I urge you to attend those training exercises because you have to embrace continued legal education.  Gone are the days when it was felt that, on admission to the Bar, or elevation to the Bench, acquiring the knowledge of the law was akin to receiving manna from Heaven, requiring an effort no more laborious than to don a gown and bands….  The law undergoes change, whether by legislation, court decision or practice direction, and it is your duty to keep up with those changes,” Sir Marston stressed.

He told the new entrants to the Bar that they should be mindful of their actions in court, since there were instances where attorneys sat in open court while being addressed by a judge, and an attorney remaining seated while addressing the Court of Appeal.

The Chief Justice also cautioned the new attorneys to protect their reputations in all of their deliberations.

“If you are perceived to act as a rule in an unprincipled and unjust manner, it will affect your reputation, even if your actions have achieved a just result…. One dishonest lawyer often leads to the wholesale castigation of the entire profession,” he warned, while urging them to be aware of the serious consequences of any ethical missteps.

The new attorneys were also reminded that they were at the start of a long career, but their success in the field would depend heavily on their willingness to work, and their ability to come to court prepared.