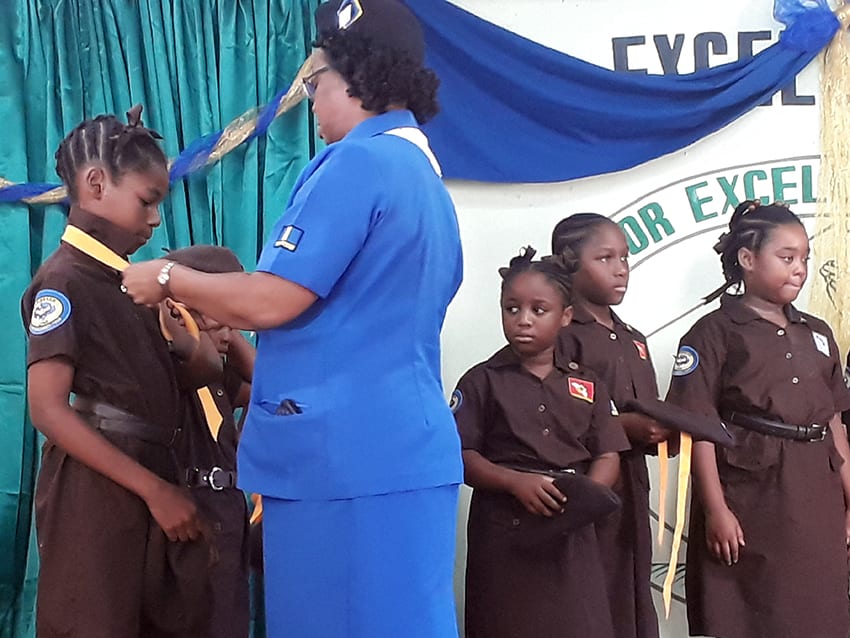 It is said that adults should lead by example, and if there is one lesson to be gleaned from the example set by the principal and teachers at the Ignatius Byer Primary School, it is that “perseverance seldom fails”.

Management at the Lowlands, St. Lucy school established its Blossom and Brownie Pack – the 75th Unit – after encountering many obstacles over the years.

Twenty pupils – 16 Brownies (Dolphins, Honey Bees, Butterflies) and four Blossoms were enrolled this morning into the local chapter of the global “sisterhood” of civic-minded young women, who fall under the umbrella body of the 100-year-old Girl Guides Association.

The young girls beamed as they recited the Blossom and Brownie promises before District 7 Commissioner, Mrs. Mavis Marshall, who presented them with their promise pins. She challenged them to be world changers, reminding them of the responsibility they now carried.

“When you make your promise, you are now part of a long line of fine, courageous girls…young women and leaders who are changing our world.  It doesn’t have to be Africa or Asia; it’s your world right here at Ignatius Byer; your world where you live and where you go to church.  So, you are saying ‘yes’ this morning to changing your world and our world. So, when I welcome you with the ‘left handshake’ of fellowship, it is going to be your turn to do good; it’s your turn to change the world,” the District Commissioner told the girls.

Principal Linda Graham took parents and staff through the journey of establishing the pack at Ignatius Byer Primary School. She explained that while she encountered many stumbling blocks, she did not listen to the naysayers and the “many no’s” she would have heard along the way.

“Persons said to me, you can’t do it and I said, ‘I can’t do it? Well, you watch me.’ From the outset, Ms. [Stacia] Springer (teacher) said to me she was willing to work with the Brownies. Ms. Springer was not trained, so I needed a trained Guider to work with her.  I have a lot of friends who are Guiders and I said let me make some phone calls and ask someone to come and help me. 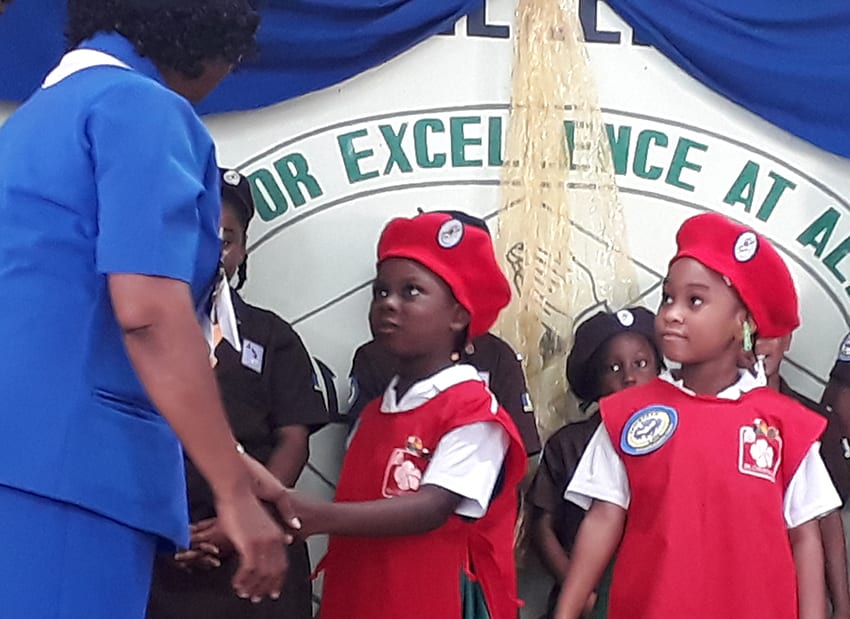 “I have a close friend who would do anything for me, and I called her up and I told her, I needed some help at Ignatius Byer Primary School, and asked her if she would come and help me. She said to me, ‘Lin, you know I would do anything for you but down there is too far, I can’t drive all the way down there to help you’. And I thanked her most sincerely because I know if she could help, she would.  Then I called another Guider and she said she was coming and I got so excited.  Then on the day she was supposed to come, she called and said ‘Well, you know I have an old car and my old car might not make it to and from St. Lucy so I can’t come.

“I called another lady and she said while she would like to help, she was working with too many schools already.  Then, Mrs. Marshall called and said: ‘Mrs. Graham, there is going to be training [at Pax Hill], if you can send someone down to be trained then you can have your own Guider’.  I want you to applaud Ms. Springer and Ms. [Krystal] Phillips (teacher) because they journeyed to Pax Hill every Thursday to be trained,” she said, to thunderous applause.

The principal said the teachers brought what knowledge they acquired back to the school to train those who were enrolled during the ceremony.  She also thanked the parents who supported their children not only with their presence at the enrolment ceremony, but by sacrificing to make sure the girls were bedecked in full Blossom and Brownie garb.

“Some parents said the clothes were too expensive and I know that in these trying times with our economy the way it is, it was hard for them, but they persevered.  And, look ladies and gentlemen, don’t they look smart in their uniforms this morning?

“I want to applaud you the parents. I want to thank you for buying into the vision that we have here at the Ignatius Byer Primary School.  I thank you for being here this morning because your being here says a lot to them.  It is saying, we love you and we want to see you actualize to being the best that you can be.  And, being a Brownie is one of the steps that will help your children realize their dreams because they are going to learn so many skills,” Mrs. Graham asserted.

During the ceremony, Ms. Springer and Ms. Phillips were also enrolled as the first two Guiders for the 75th Unit of Blossoms and Brownies at Ignatius Byer Primary School.