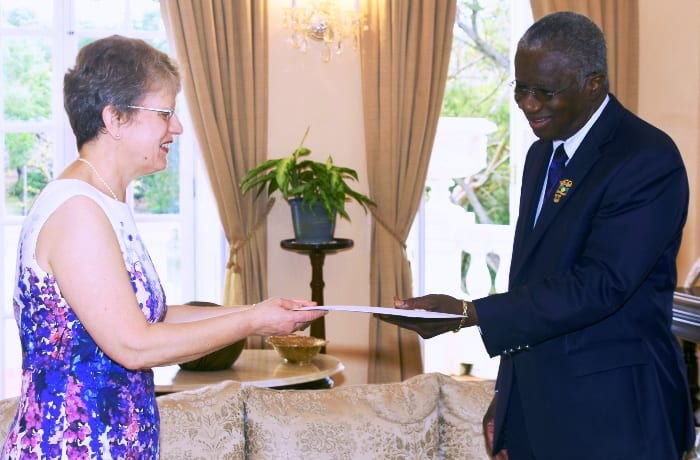 Prime Minister Freundel Stuart welcomed newly-appointed British High Commissioner, Janet Douglas, to Barbados, as she presented her Letter of Introduction to him at Ilaro Court recently.

Mrs. Douglas has been a career civil servant for more than 30 years. Her tour of duty will cover Barbados and the Eastern Caribbean.

The Prime Minister congratulated her on her appointment and wished her a successful tour in the region. He alluded to the important relationship between Barbados and Britain, both historically and post-Independence, and the many shared values, such as the preservation of human rights, the common law and the Parliamentary system.

Mr. Stuart noted the important contribution that Britain continued to make in the region, including in the area of security through the Fusion Centre at the Regional Security System. He also welcomed Britain’s commitment to climate change issues, such as energy conservation and the green economy.

In response, the High Commissioner said she looked forward to visiting the Fusion Centre which was seen by Britain as a model for cooperation which could be built on in other places.

Mrs. Douglas added that she was also very aware of the Caribbean’s vulnerability to issues such as changes in hurricane patterns and sea levels, and therefore climate change was one of the areas she intended to focus on while in the region.

The Prime Minister and the British diplomat also discussed the implications of Brexit for the region and agreed that creative ways would have to be found to ensure that the Caribbean continued to have a voice within the European Union, even after Britain’s exit.

Mrs. Douglas said that she was hoping that some of these issues would be the focus of the Commonwealth Heads of Government Conference, slated for London next year. This, she said, would be an opportunity to revitalise and consolidate relationships between Commonwealth member states.