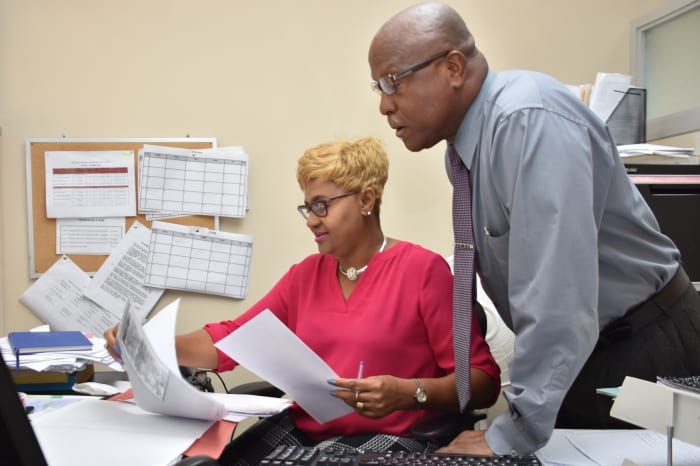 Chief Labour Officer, Victor Felix, looking over some files with a member of his staff. (C.Pitt/BGIS)

The Labour Department has a new head and he is focused on ensuring the business of that organisation is handled with “purposeful efficiency”. This includes the administration of labour legislation and lessening of adversarial labour and employment relations.

He is Victor Felix, who has been appointed on promotion to the post of Chief Labour Officer. The appointment took effect from June 1, 2018.

In an interview with the Barbados Government Information Service (BGIS), Mr. Felix noted that his primary responsibilities hinged on the quality of service his department was able to deliver to its public.

“This is not just with respect to the handling of complaints but in terms of strengthening the administration of relevant legislation; enhancing the capacity of the department; and building the sense of partnership in the processes of labour and employment matters which is an important public policy objective.

“We have various pieces of new legislation we are working with. We need to develop these in terms of getting them mainstreamed and building awareness around them,” he explained, adding that promotional efforts would continue to heighten stakeholders’ interest and level of awareness on the new laws and standards.

According to Mr. Felix, new legislation impacting the work of the Labour Department and on labour and employment relations include: The Employment Rights Act, the new Shops Act, the new Holidays with Pay Act, the Minimum Wages Act and the Sexual Harassment (Prevention) Act.

[x_pullquote cite=”Chief Labour Officer, Victor Felix” type=”left”]“Take indoor air quality, for instance, there has to be a national focus on how we approach alleviating these issues that continue to arise leading to the abandonment of work sites and the effects of mould and other pollutants on workers’ health and well-being.”[/x_pullquote]

Queried about the department’s thrust to promote health and safety, he noted that while currently interest might seem to be on the newer pieces of legislation, occupational health and safety issues were longer standing and on-going in nature.

Stressing that the focus was still on workplace health and safety, he added that this would continue against the backdrop that environmental issues in the workplace were arising as a significant area of concern.

“Take indoor air quality, for instance, there has to be a national focus on how we approach alleviating these issues that continue to arise leading to the abandonment of work sites and the effects of mould and other pollutants on workers’ health and well-being,” he said.

On Government’s stated policy to broaden social dialogue through the Social Partnership and including a wider participation of interests not currently represented, he said: “With diminishing engagement in adversarial relations it is a positive development to have emphasis placed on collaboration and cooperation across social elements and sectors.

“Before there was a Social Partnership, the entire process was that much more adversarial. Now however, we are working within the framework of partnership and protocols and persons tend to work within the recognised needs of the society as a whole, so that narrower stakeholders’ needs are being viewed within the context of the overall national good and that is as it should be.” 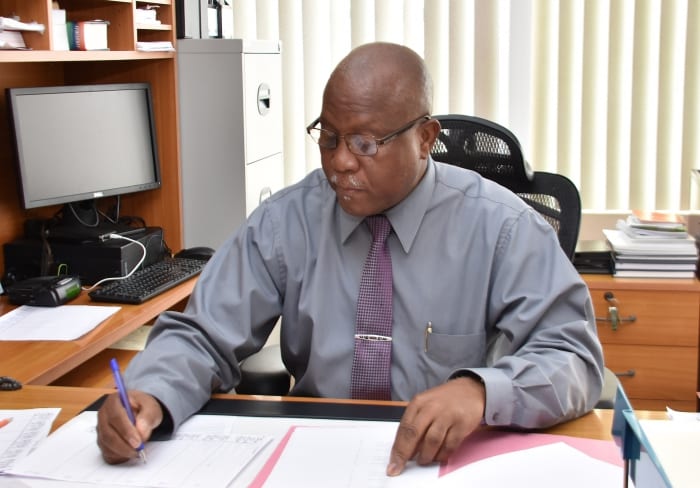 On the job! Chief Labour Officer, Victor Felix, at work in his office in the Warrens Office Complex. (C.Pitt/BGIS)

Prior to his civil service career, from the early 70s to mid-80s, Mr. Felix worked with the then Allied Metal Limited; the Barbados Dairy Industries Limited – Pine Hill Dairy and Intel (B’dos) Limited.

He holds a Certificate in Labour Administration, and a Bachelor’s Degree in Management (with Honours) from the University of the West Indies (UWI), Cave Hill. These he obtained in 1990 and 1998 respectively.  He is also a graduate of the London School of Economics and Political Science (LSE), where he studied for his Masters in Industrial Relations and Personnel Management.

[x_pullquote type=”left”]The new Chief, whose office falls under the aegis of the Ministry of Labour and Social Partnership Relations, has over 34 years in the field.[/x_pullquote]

He has also written and presented extensively on a range of topics in his field, including industrial relations and alternative dispute resolution – mediation and conciliation. Well versed in these disciplines, it comes as no surprise therefore that he is tasked with serving as the country’s principle resource in conciliation/mediation and labour and employment matters.

Apart from academic achievements, however, Mr. Felix can boast of having led the process of capacity building for the implementation of the Safety and Health at Work Act, leading to its proclamation in 2013. With the emergence of HIV and AIDS in the 1980s as an issue with implications for the workplace, he was involved as a member of the Factory Inspectorate, in the formulation of national policy for the workplace.

A key outcome of this work has been The Social Partners of Barbados Code of Practice on HIV/AIDS and Other Life Threatening Illnesses in the Workplace. With the National Expanded Response to HIV and AIDS, Mr. Felix also played an early role in worker sensitisation and education on the subject.

With over three decades in his field, Mr. Felix views his elevation as an opportunity to strengthen the work of his organisation. He also sees it as a chance to uphold the Labour Department as a model for civil service here and abroad.

“My vision is for the Labour Department to be seen as one where service is of the highest quality. Having worked in the system for many years and having prepared myself for the role through education and training, I am pleased now to be in a position to ensure satisfactory levels of service to the people of Barbados and further afield,” he stated.