A new trend is emerging across Barbados where drug users are mixing drugs into a single dosage.

The trend is referred to as polydrug use by those involved in the fight against illegal drugs, with marijuana, cocaine, alcohol and cigarettes being identified as those being mixed by users.

These were among the findings highlighted in the 2015 Barbados Drug Information Network (BARDIN) Report at the National Council on Substance Abuse’s (NCSA) office recently.

Research Assistant at the NCSA, Laura Lee Foster, said polysubstance abuse was now the “front runner”, as fewer persons sought treatment for alcohol or marijuana only.

In fact, Ms. Foster stated, statistics captured in the BARDIN between January 1 and December 31, 2015, indicated that 78.7 per cent of persons receiving substance abuse treatment at the Psychiatric Hospital admitted to using polydrugs. This, she said, compared with 11.2 per cent who used alcohol only; 7.9 per cent who used marijuana only; and 2.2 per cent who used other drugs, during the same period. 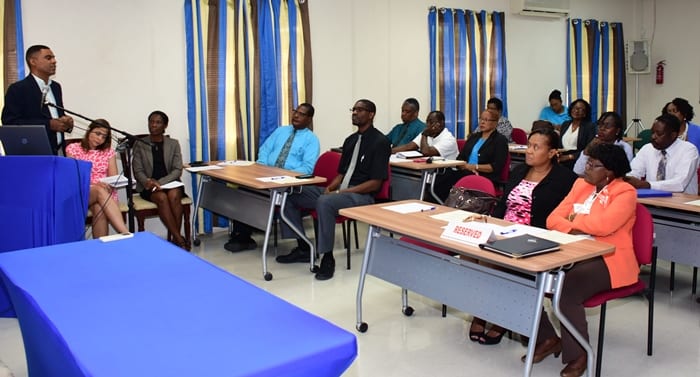 Research and Information Officer at the NCSA, Jonathan Yearwood, speaking at the presentation of the 2015 Barbados Drug Information Network (BARDIN) Report at the NCSA recently. (C.Pitt/BGIS)

Also addressing the stakeholders gathered was Research and Information Officer at the NCSA, Jonathan Yearwood, who said the emerging trend was evident between 2012 and 2015.

The Research and Information Officer cautioned that the emerging polydrug use trend might pose challenges for drug treatment and drug education and prevention practitioners.

“Can you isolate the treatment of a marijuana addict or isolate the drug related to alcohol or cocaine and treat the person separately, or is it better to look at the psychological factors which caused the person to use drugs in the first place?” he queried.

Mr. Yearwood suggested that attention needed to be paid to the factors which drove drug use, among them cultural acceptance and beliefs.