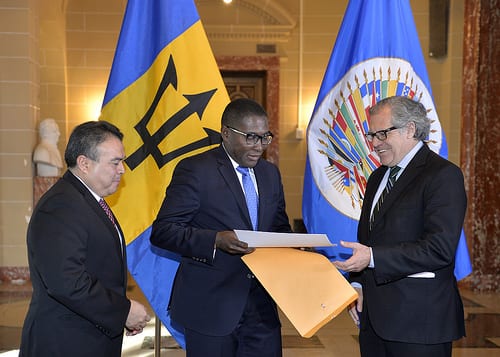 Barbados’ new Permanent Representative to the Organization of American States (OAS), Selwin Hart, presented his credentials to the OAS Secretary General, Luis Almagro, at its headquarters in Washington DC, on Monday.

During the ceremony, Ambassador Hart reaffirmed his country´s commitment to the regional body. “We see the OAS as the premier multilateral organization of the Americas, working to maintain peace and security, protect human rights, promote and consolidate democracy, and advance cooperation for integral development,” he said.

Ambassador Hart’s new assignment comes after serving as Director of the United Nations Secretary-General’s Climate Change Support Team, and it continues his 20-year career in the Foreign Service of Barbados.

Secretary General Almagro welcomed the Barbadian diplomat, and said his experience would be of great value to the OAS. “We are confident that your leadership on environmental and development issues, among others, will be invaluable in helping to chart a more focused role for the OAS on this and other pillars of the organization,” he said.