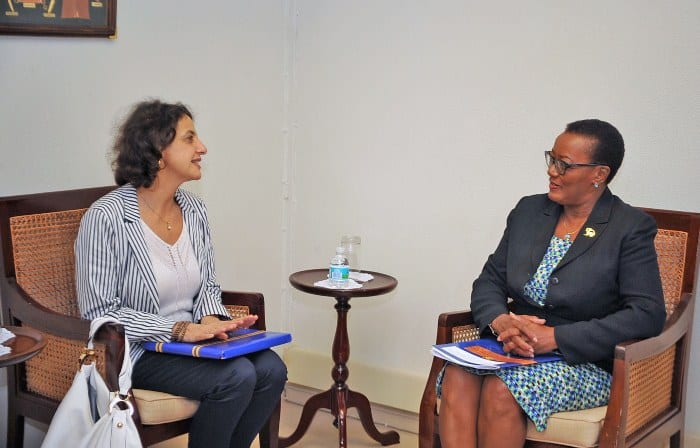 Minister of Foreign Affairs and Foreign Trade, Senator Maxine McClean (left) in discussion with Ambassador of the European Union (EU) and Head of Delegation, Daniela Tramacere during a recent courtesy call at her Culloden Road, St. Michael office. (A.Miller/BGIS)

Barbados is continuing to focus on sustaining economic activity in its international business sector.

Minister of Foreign Affairs and Foreign Trade, Senator Maxine McClean, stressed this recently when she met with newly-appointed Ambassador of the European Union (EU) and Head of Delegation in Barbados, Daniela Tramacere.

Senator McClean told the Ambassador: “Part of our priority is making sure that we are able to sustain our economic activity. For us, this is particularly within the context of our domestic programming of our international business sectors. This is very critical.”

And, the Foreign Minister added: “I think we have to look for opportunities because youth unemployment is not only a challenge here but across the region. So, whatever we do, we have to be able to build into that the opportunities for the youth. I think a critical element there is entrepreneurship.”

Senator McClean acknowledged that Barbados invested heavily in education, and, as a result, placed emphasis on ensuring the necessary opportunities for its young people.

She said too there was a need to look creatively at getting young people to collaborate across the region, and at joint ventures and business investments that did not necessarily require the movement of persons.

Ambassador Tramacere noted that her organisation had a “keen interest in supporting as much as possible, the integration process”.

“We have to change the way that we work. We have already changed but we have to evolve with a new type of relationship. But I think the process has already been started but with a clear understanding of where we stand and what we are working for.  We have plenty of commonalities; we need you as much as you need us, maybe in a slightly different way but we have similarities in what we see as a vision, climate change for instance,” she stated.

The two officials also discussed matters related to BREXIT and its impact on Barbados and the region.