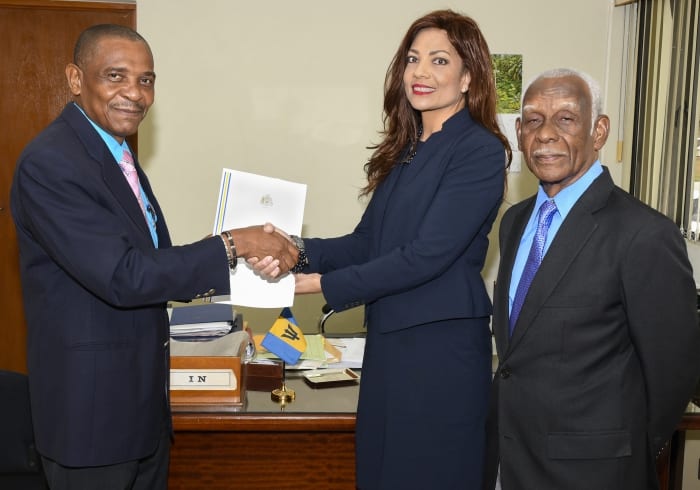 Chief of Protocol, Philip St. Hill presenting the new Honorary Consul of Spain in Barbados, Connie Smith, with the Exequatur at the Ministry of Foreign Affairs recently. Looking on is Dean of the Consular Corps, Selwyn Smith. (C.Pitt/BGIS)

A new Honorary Consul of Spain in Barbados has been appointed.

She is Connie Smith, Managing Director of Tricor Caribbean Limited and a past president of the Barbados International Business Association (BIBA).

She replaces Mrs. Mandy Chandler, who served in that capacity from April 2009 to August 2017. Like Ms. Smith, she is an experienced business executive.

Ms. Smith was recently presented with her Exequatur by Chief of Protocol, Philip St. Hill, in a brief ceremony at the Ministry of Foreign Affairs and Foreign Trade, Culloden Road, St. Michael.

In congratulating the new appointee, Mr. St. Hill assured her that the Ministry stood ready to lend support to her assignment. He also provided an insight into the Barbados-Spain relationship, saying: “We haven’t had a lot of what you would term active relations and technical cooperation projects …, but the friendship continues and I know that we have a very active consultation for elections to international bodies. Barbados has benefited from the support of Spain and I believe Spain has, in the past, also benefited from Barbados’ support.”

Mr. St. Hill hailed the signing of a Double Taxation Agreement (DTA) with Spain in 2010 as a significant milestone and said it bore with it the hope that it could “be used as a basis for the generation of more business contact and business relations between the two countries”.

Assuring the new Honorary Consul she was ideal for the position, given her background in the business arena, he added: “We would hope that during your tenure we could move forward in these areas of business.”

The Chief of Protocol also alluded to Barbados’ concerns about the European Union’s blacklisting and stressed the signing of the DTA with Spain had been instrumental in ensuring Barbados was earlier dropped from Spain’s blacklist, something he hoped would continue indefinitely.

Expressing the hope that there would be the signing of some technical cooperation agreement in the future, he said Barbados would be aiming for the continued expansion of bilateral relations “not limited to any one sector or any one area”.

Dean of the Consular Corps, Selwyn Smith, also welcomed Ms. Smith to that body and provided a brief overview of its role and function and the expectations that might come with her role. He noted that she had the potential, like Sir Trevor Carmichael, Peter Laurie and himself, to find herself “doing several decades of service” to the Corps.

Ms. Smith, in her response, thanked the Protocol Chief and the Foreign Affairs and Foreign Trade Ministry for the confidence reposed in her.

“I confirm here and now, the assurance that I would do my very best to provide the greatest level of cooperation with the Barbados authorities in all issues related to my new responsibilities, following in the footsteps of my predecessor Mandy Chandler.

“In this globalised world, bilateral relations among states have to be fluid, quick and efficient. Please rest assured that in my new capacity and being aware of the limits of my mandate, I will do whatever it is in my power to contribute at the local level to maintain a good working relationship between Barbados and Spain,” she pledged.

She noted also that she looked forward to Barbados negotiating and having a Bilateral Investment Treaty with Spain to complement the Double Taxation Treaty already in place.

The new Honorary Consul further noted that the Ambassador of Spain to Barbados, Javier Carbojosa, who is resident in Trinidad, was due to visit the island and was looking forward to meeting with local authorities to discuss points of mutual interest and benefit to both countries.