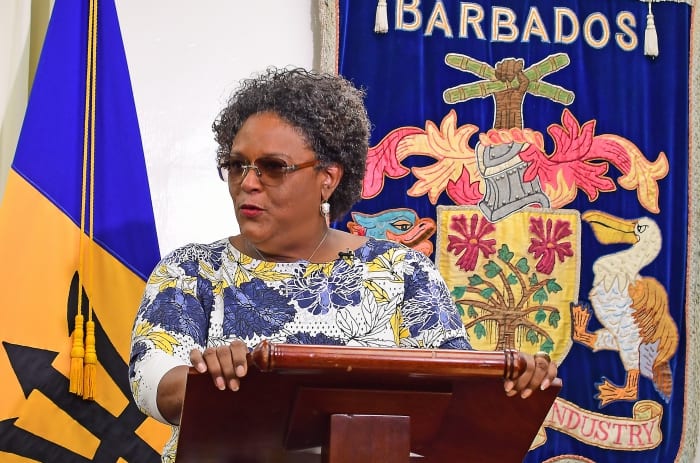 The Cabinet of Barbados not only has a team of new ministers, but also a new structure.

The Cabinet was announced by Prime Minister, Mia Amor Mottley, on Saturday, ahead of a public swearing-in ceremony scheduled for Sunday, May 27, at the Bay Street Esplanade.

Ms. Mottley said the Cabinet would be “relatively large” given the mandate of the people of Barbados; the scope of work to be done; and the level of expertise that was at their disposal through elected members.

“Given the dire state of our economy and the tremendous work that would be involved in rescuing and rebuilding this country, the salaries of a few extra ministers is relatively insignificant given that there will be tremendous savings from the containment of wastage and the curtailment of corruption in my Cabinet,” Ms. Mottley reasoned.

She explained that she would be holding Cabinet ministers “to a very high standard of efficiency and productivity”, and therefore opted to share the workload across a significant proportion of the Parliamentary group rather than conform to the theory of a small Cabinet.

The Prime Minister noted that the structure and layout of the Cabinet would see the “traditional bedrock portfolios”, even as the new Government sought to embrace new concepts and opportunities.

These include initiatives such as the Maritime exploits and the Blue Economy; People’s Empowerment and Elder Care; and the concept of Innovation, Science and Technology.

Meanwhile, she revealed, the Ministry of Home Affairs would be a standalone ministry under the new administration and would be responsible for the Royal Barbados Police Force.

Ms. Mottley also noted that Barbados’ Constitution required that there be three members of the Senate appointed to the Cabinet. She said that during her discussion with the Governor General on the issue of appointments, it was noted that the Constitution did not make provision for the appointment of Opposition Senators in the absence of a Leader of the Opposition.

“We discussed the need for an urgent amendment to the Constitution to allow the opposition political party securing the highest number of votes to recommend two appointments to the Senate.

“Even though there has been no official Leader of the Opposition, Government would wish to have accommodated the views of the main opposition party that secured the largest amount of votes. In this instance, we are effectively speaking about the Democratic Labour Party,” she stated.

Ms. Mottley stressed that it was only fair to the country, therefore, that those amendments be made “to be able to secure their voice rather than have them absent from the Parliament of Barbados”.

She added that should the Opposition party fail to respond positively, the Governor General would appoint two Senators acting on the advice of the Prime Minister, following consultation with organisations and interests believed to be important to be reflected in the Senate. “The amendment, therefore, will speak to both of those issues,” she said.

She added that in the near future, Government would also make announcements about key persons on whom it will depend to resolve the “mission critical” areas outlined.