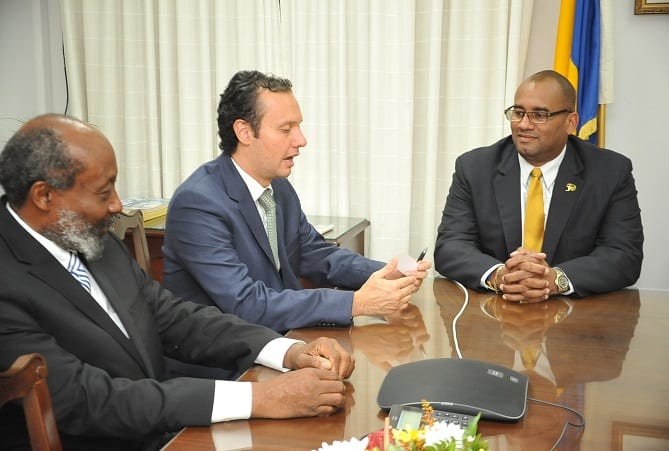 Mr. Gonzalez, who was accompanied to Government Headquarters by Mexico’s Honorary Consul in Barbados, Sir Trevor Carmichael, is also accredited to Suriname and Trinidad and Tobago, where he is based.

Mr. Sealy welcomed the Ambassador to his new post, and noted that Barbados recognised Mexico as a major political influence and a strong emerging economy in the western hemisphere.

The Acting PM, who is also Minister of Tourism, said that Barbados was very interested in pursuing the tourism market in that country. He pointed to the strength of domestic tourism in Mexico to areas such as Cancun, and said that Barbados felt it could penetrate that market by offering “something different”.

The Ambassador acknowledged that there was potential for such a development but connectivity continued to be a challenge since visitors would have to go through either Panama or Miami to reach Barbados. He added that many Mexicans were visiting the Caribbean via cruise ships.

Mr. Sealy said that as local tourism authorities continued to build a more robust industry by expanding source markets and strengthening its product offering, he was sure the island would prove increasingly attractive to “discerning Mexicans”.

Meanwhile, the Mexican Ambassador updated the Acting PM about a major event in Mexico in November aimed at encouraging business between the two countries. He said that anyone interested in exporting goods to Mexico or importing goods from that country were invited to participate, particularly in the agro-business sector.

He also highlighted the opportunity to study in Mexico through five post-graduate scholarships being offered in a wide range of areas, including engineering, science and agriculture.

Mr. Sealy welcomed these initiatives and wished the Ambassador well during his two-year assignment in the region.