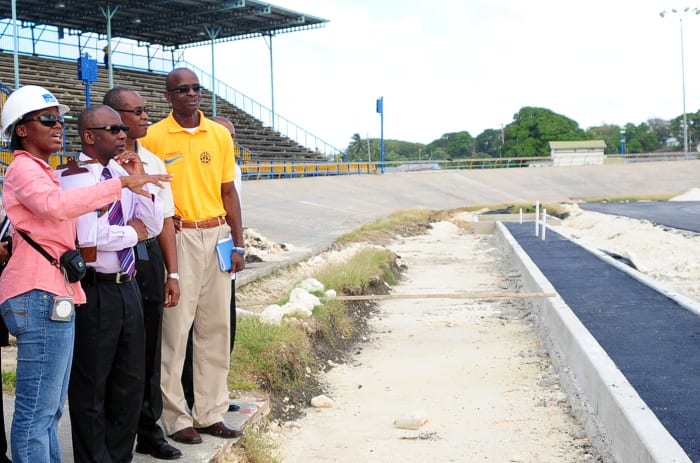 Minister of Sports, Stephen Lashley, and officials tour the National Stadium during the laying of a new track in 2013. (FP)

Barbadian athletes are one step closer to having a new National Stadium to call their own.

This disclosure came today from Sports Minister, Stephen Lashley, who revealed that the Cabinet of Barbados had approved the submission of the project to redevelop the National Stadium to the Government of the People’s Republic of China for grant funding.

According to the Minister, the People’s Republic of China had indicated interest in funding the construction of a large-scale project such as a new National Stadium or a National Creative Centre.

Mr. Lashley stated that the submission of the project to the Government of the People’s Republic of China was to be “promptly done” by the Ministry of Foreign Affairs and Foreign Trade.

The Minister underscored that the redeveloped National Stadium was key to the further transformation of the sports sector in Barbados and to the development of sports as a viable economic sector.

“With a redeveloped National Stadium, Barbados will be able to host regional and international athletic events including the CARIFTA Games, while earning for Barbados valuable foreign exchange,” he noted.