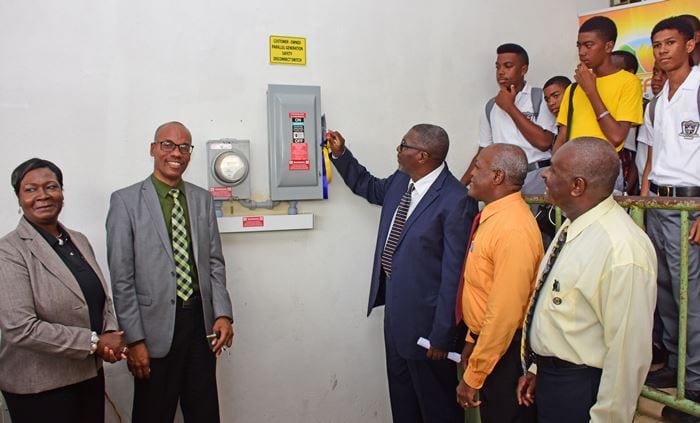 The Division of Energy has continued its mission to promote renewable energy and energy efficient initiatives in Barbados with the installation of a 12-kilowatt photovoltaic system at the St. Leonard’s Boys’ School.

Parliamentary Secretary in the Ministry of Education, Science, Technology and Innovation, Senator Harcourt Husbands, flicked the switch to turn on the system, during a ceremony at the Richmond Gap, St. Michael institution last Friday.

Chairman of the school’s Board of Management, Ricardo Harrison, told the students that the installation on the roof of the school’s auditorium would provide enough electricity “to power three medium-sized houses”, and explained that because the system was tied to the grid, the school would be able to sell some of the electricity generated back to the Barbados Light and Power Company.

Senator Husbands, in his address to the students, challenged them to take advantage of the tremendous opportunities available to them in the fields of science, technology and mathematics.

He said that while the renewable energy initiative would save money and protect the environment, the students must also see such initiatives as the future, and recognise the opportunities available to them in these areas.

“If you are to reap success, there are some things you have to do. Pay close attention in class and take the advice of your teachers. Be prepared to work hard and be prepared to make sacrifices,” he advised.

The installation of the photovoltaic system is part of Government’s comprehensive renewable energy and energy efficiency programme, which aims to reduce electricity consumption and the island’s dependence on fossil fuels.  The project is being funded by the Inter-American Development Bank (IDB) to the tune of US$1 million.

Under the renewable energy component of the project, the Energy Division has installed 25 photovoltaic systems on houses across Barbados, as well as on two other educational institutions – the Cave Hill Campus, University of the West Indies and The St. Michael School. The total installed capacity is 96 kilowatts and all the systems are tied to the grid.