New Plans For The Barbados YMCA 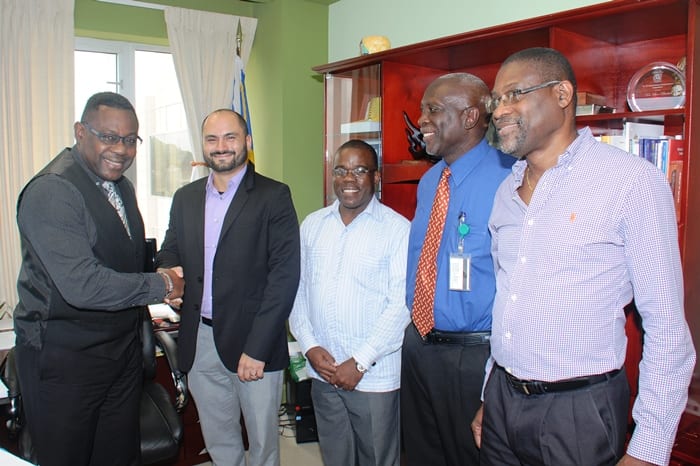 The Young Men’s Christian Association (YMCA) has become irrelevant and there are plans afoot to reestablish the organisation as a “pinnacle in society”.

The new vision for the longstanding social organisation was shared by its President, Antonio Elcock during a recent courtesy call on Minister of Social Care, Constituency Empowerment and Community Development, Steve Blackett at the Minister’s Office.

Mr. Elcock, who was accompanied on the visit by General Secretary of the Latin America & Caribbean Association (LACA) of the YMCAs, Antonio Merino explained that the organisation needs to develop ‘relevant programmes’, which would engage their target audience in “meaningful, useful and relevant activities off the streets”.

Minister Blackett shared the President’s views, while lauding the YMCA for its well-known breakfast feeding programme and noting that the organisation has a wide range of sporting and educational initiatives. He assured the board members that as the organisation seeks to evolve, members would have the Ministry’s continued support.

In addition to developing relevant programmes for the organisation, Mr. Elcock also pointed out that the board is also seeking to enhance the aesthetics of the facility, as its current state is not inviting to the public.

“I think the persona and the perception when passing the building is that nothing happens, due to the condition and the state of the facility…we have taken the decision that we really need to enhance the facility to let people know that we can offer them some sort of relief and activity,” he stated.

General Secretary, Antonio Merino, who is currently in his second year of office, said he was excited to connect with the island’s branch of the organisation and experience its “strong legacy”, as it was the first YMCA to be developed in the Caribbean and Latin America.

He added that during his short visit to the island, he hoped to learn more about the organisation, and discuss how the Latin America and Caribbean Association of YMCAs could support the organisation’s development.

Other topics discussed during the courtesy call included the YMCA’s sporting programme in Barbados, as well as the provision of a hostel facility at the organisation’s headquarters in the future, to provide boarding for visiting teams and other persons.