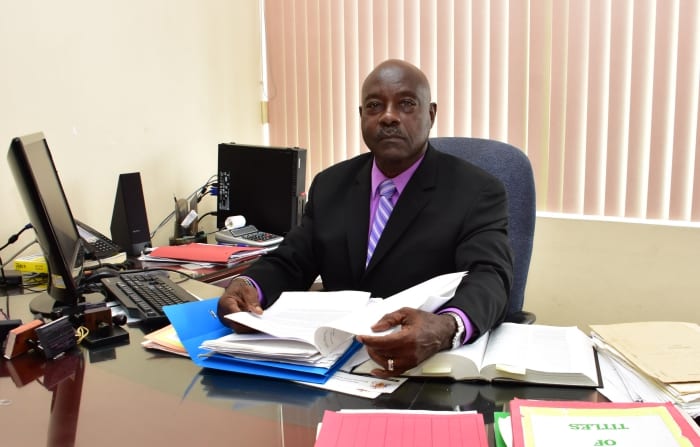 New Registrar of Titles at the Land Registry Department of the Ministry of Housing Lands and Rural Development, Winston Coppin. (C.Pitt/BGIS)

A new Registrar of Titles has been appointed at the Land Registry Department of the Ministry of Housing Lands and Rural Development.

He is Mr. Winston Coppin who, over the past five years, has acted in that position.

Appointed on promotion to the post on Thursday, March 1, Mr. Coppin started his civil service career in 1975, working as an Air Traffic Control Officer.

After graduating from the Law Faculty of the University of the West Indies (UWI), Cave Hill Campus, in 1988, he studied at Hugh Wooding Law School, Trinidad, from 1988 to 1990.

On his return to Barbados, he worked as a Registration Officer at the Land Registry in 1991, when it was located at the Garrison, St. Michael. He was then appointed Secretary to the Caribbean Broadcasting Corporation from 1992 to 1994.

In 1997, Mr. Coppin was appointed Principal Crown Counsel in the then Ministry of Public Works, Transport and Housing, with the responsibility of setting up a Legal Unit in that Ministry. He has also been a resource presenter on Road Traffic legislation for the International Road Federation in Jamaica and St. Lucia.

He has acted periodically as Registrar of the Land Registry Department since 2012 but has been in that position continuously from 2013 to his appointment as Registrar this year.

Mr. Coppin described his appointment as one where he now has the responsibility of “strengthening the work of previous Registrars as the Department continues its Vision – To be a world class Land Registry – and its Mission – To provide a rapid, safe, reliable and high-quality service to all its customers in a competitive globalised environment.”

The newly-appointed Registrar stated that the objectives of the department, which is currently celebrating 30 years of operation, were “well on the way” to being realised, in that 85 percent of its operations and services to the public were now technology driven.

He disclosed that it was hoped that within the next 18 months, most, if not all, of the Registry’s services would be available to the public by way of an online facility.

Mr. Coppin praised the professionalism of the former Land Registry staff, as well as the current staff, who he said managed and administered the mandate of the Land Registry in “a transparent and professional manner” that was “second to none in either the private or public sector”.