The Barbados Agricultural Development and Marketing Corporation’s (BADMC), existing national cassava value chain programme is in for a big boost.

That is because the BADMC, with assistance from the Food and Agriculture Organization, will be establishing a state-of-the-art cassava mill and food processing facility at its headquarters in Christ Church.

Chief Agriculture Officer (CAO), Dr. Lennox Chandler, made the announcement today as he delivered an address on behalf of Minister of Agriculture, Food, Fisheries and Water Resource Management, Dr. David Estwick, during the graduation ceremony for the Ministry’s Youth Agri-preneurship Incubator Programme, at the Lloyd Erskine Sandiford Centre.

Dr. Chandler noted that the cassava value chain programme had been “highly successful” and represented the highly-technological projects introduced by the BADMC to augment the food processing agriculture sub-sector.

The top Agricultural Official told his audience that the BADMC’s cassava value chain project had achieved success in coordinated cassava scheduling and procurement: the development and marketing of the cassava baking industry; the development and marketing of frozen desert products such as ice cream and sorbets; and the selective public/private partnership that has resulted in the subsidised offering of cassava mash to Purity Bakeries.

He stated: “The new facility is expected to significantly boost cassava production and efficiency of not only cassava value-added products, but also other root crops such as sweet potato, which the Ministry, in collaboration with the BADMC, intends to develop.

“These value chains will be developed in concert with the Food and Agriculture Organization which was instrumental in the development of the cassava value chain project.” 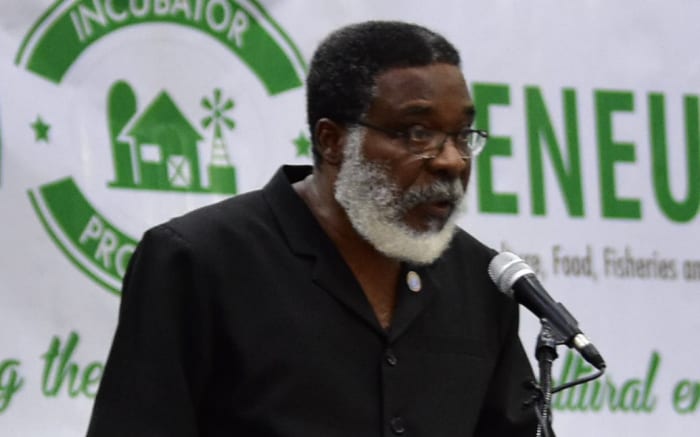 While the Ministry has embraced technology, the CAO made it clear that traditional methods of agriculture had not been abandoned as there was room for both to be used successfully in Barbados.

He explained that the knowledge-based system consisted of three systems: a Bajan agriculture marketplace, an agricultural market information system and a farm management system.

“At this point, I wish to take the opportunity to extend gratitude to the European Union for providing the funding necessary for making these two important projects a reality.  Thanks must also be extended to the Minister of Labour, Social Security and Human Resource Development for the support,” the CAO underlined.

Dr. Chandler gave the undertaking to ensure that the young people involved in the Youth Agri-preneurship Incubator Programme received the necessary support.

Thirty-nine graduates from cohorts three, four and five, received certificates and special prizes during the ceremony.