A new tourism record was set for 2016 when 610,000 long-stay visitors visited Barbados.

Prime Minister Freundel Stuart made the disclosure last evening, when he hosted the first of four receptions for repeat visitors at his official residence, Ilaro Court. He noted that a record was previously set in 2015 when 592,000 long-stay visitors visited these shores.

Mr. Stuart stated: “I should like to thank and congratulate all of our tourism stakeholders for the energetic inputs which they have made in the promotion of our tourism product and our destination so that we could put these records on the books. “… I confidently expect that at the end of the year 2017, it will be reported to me that we have had 650,000 visitors visit Barbados.”

The Prime Minister said 2017 would be an interesting year for some of Barbados’ principal source markets, namely the United Kingdom (UK), the United States of America (USA) and Canada.

He pointed out that Canadians would be in celebratory mode because their country would be celebrating 150 years as a Confederation. He congratulated Canada on the achievement of this significant milestone, saying it was not easy creating and keeping the dominion of Canada.

Mr. Stuart added that the USA, with whom Barbados has had a very long and amicable relationship, would have the inauguration ceremony for President-elect, Donald Trump, on January 20.  In addition, he stated that the United Kingdom’s Supreme Court was expected to decide this month on who has the power to trigger the formal process of leaving the European Union.

He stressed that Barbados had a vested interest in what happened in the UK, USA and Canada. “We cannot ignore developments in those three countries because invariably and inevitably what happens in those countries will have an impact on either what we do here in Barbados or on how we do it. And, therefore, we err grievously if we seem to be ignoring what is going on elsewhere…,” he warned. 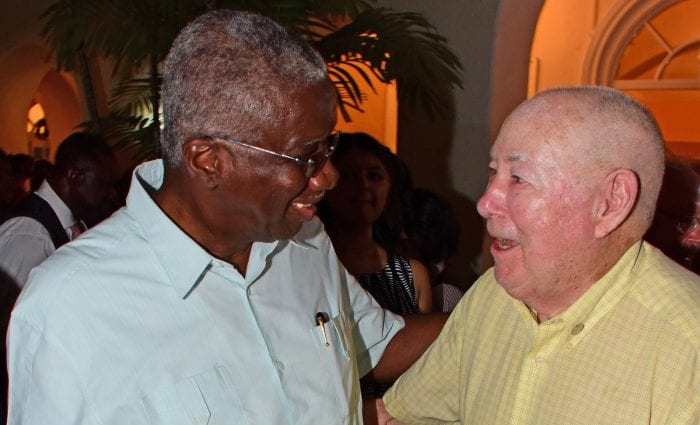 The Prime Minister said visitors constantly told him that they returned to Barbados because of the warmth and hospitality of its people. He added that successive governments had worked on citizens to ensure they understood that tourism was their business and every single person must play his or her part.

“That is why we bring students from our primary schools to these receptions, because they too must understand as early as possible…that this industry is important to the present and future development of Barbados.

“So far, we have succeeded in our initiatives in that direction, and I want to place on record my very profound gratitude to the people of Barbados for being the great hosts and hostesses they have been over the years to those people who visit our shores,” Mr. Stuart said.

The Prime Minister described Barbados as a “highly personalised country”, and urged tourism stakeholders to continue improving the Barbados brand.

Guests who were honoured during the function were: Norman Aird, who visited 40 times; Richard and Maria Walters, who were on their 35th visit; Jill Angell and Ian Jenkin, as well as John McGhee, who have come here 30 times; and Jean and Terry Hough, who are on their 28th visit.