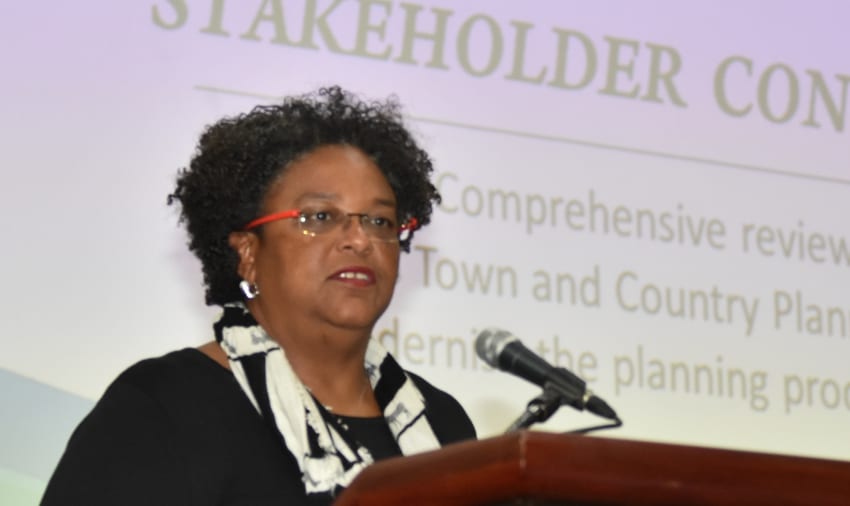 Barbados is expected to have new town and country planning legislation in place before year-end.

Prime Minister Mia Amor Mottley on Monday told a Stakeholder Consultation on the Reform of the Town and Country Planning Act Cap. 240 that she wanted the legislation to go before Parliament in October, but no later than November.

Ms. Mottley said: “We do not have the luxury of time and I have asked that these consultations take place within the next four to six weeks, such that we can move to the stage of drafting, even if it means us having to engage in a special purpose framework for that drafting to take place because we want this legislation before Parliament….”

She expressed the view that it was necessary to address the issues of public housing and density through the planning process. She noted that houses and public housing that were built in the 1950s and 60s for parents and children, now had three and four generations of people.

“Our Government is committed to reducing the density that some of our people are forced to live under in some of these public housing estates. What has happened, is that in the absence of effective planning, people have done what they want to do in order to accommodate the overcrowded aspects of those houses…. We have an urgent obligation to do right by our people both in terms of the density and the functionality and the aesthetics with respect to our housing,” she stated.

Ms. Mottley told the stakeholders that she would like them to discuss not only planning issues but areas that would lead to greater social cohesion and economic enfranchisement.

“The question…is whether we ought not to reduce the density of some of these public housing areas by identifying specific areas into which persons from there…can effectively be given an opportunity to purchase and build, so as to immediately reduce the density, and by extension, the socio-economic problems and safety issues that are arising…,” she pondered.

The Prime Minister said she also wanted to find out from the stakeholders if there was another way for Government to review the perspectives and opinions of the multiple departments that were now consulted on different aspects of an application.

She added that during the discussions, participants should determine whether the current system for appeals and administrative decisions was the one to be carried forward.

Ms. Mottley stressed that Barbados could not get out of the current economic condition without growth and disclosed that there were requests before Government to build high-rise buildings in and outside Bridgetown. She noted that Government was committed to doing the environmental scoping study to determine the feasibility of reclamation of lands since Barbados has very little green space left.

The consultation was held at the Lloyd Erskine Sandiford Centre on Monday afternoon for professionals, including public and private planners, developers, investors, architects and others who interact with the planning process.