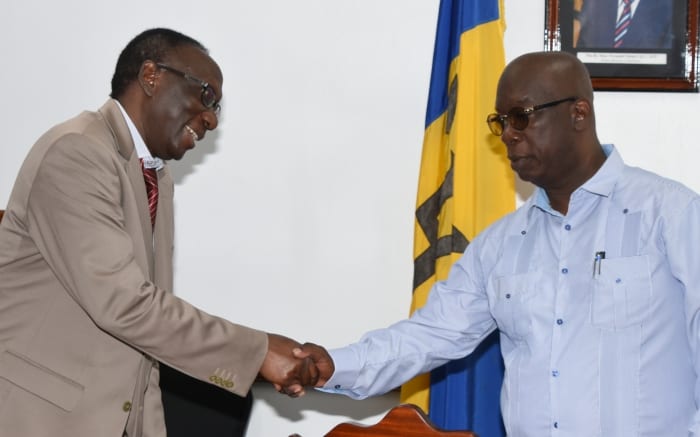 Dr. Kamuragiye, who also met with Permanent Secretary, June Chandler; and Chief Education Officer, Karen Best, during his visit, said that Barbados needed to learn from the examples of countries like Dominica, which was decimated by the passage of Hurricane Maria.

The UNICEF Representative, who took up the post on November 5 this year, explained that he wanted to meet with Mr. Jones early on in his tenure to discuss matters pertaining to education, but was kept busy with humanitarian operations in those Caribbean countries under his jurisdiction which were severely affected by weather systems.

He said that the message for affected Caribbean countries was “to build back better and stronger”. And, his message to Barbados was to invest in resilience. He added that he was astonished by the extent of the destruction in Dominica and the British Virgin Islands, where their education systems were “completely destroyed” in the aftermath.

“A resilient school…. It is about the safety of the physical plant itself. CDEMA has done a great job in developing the toolkit on the Model Safe School Programme for Caribbean Schools. The school should be safe for the kids and teachers – plus, they are used as [hurricane shelters].

“The second component is about integrating risk reduction into the curriculum and the third dimension is about the school disaster management plan,” he explained, adding that the concept was currently being rolled out in Dominica. He said that UNICEF was willing to assist the Ministry of Education in implementing the model in local schools.

Mr. Jones pointed out that resilience, in the Barbados context, was built through Government’s resources, as well as through entities such as the Caribbean Catastrophe Risk Insurance Facility (CCRIF) and the Regional Insurance Fund. 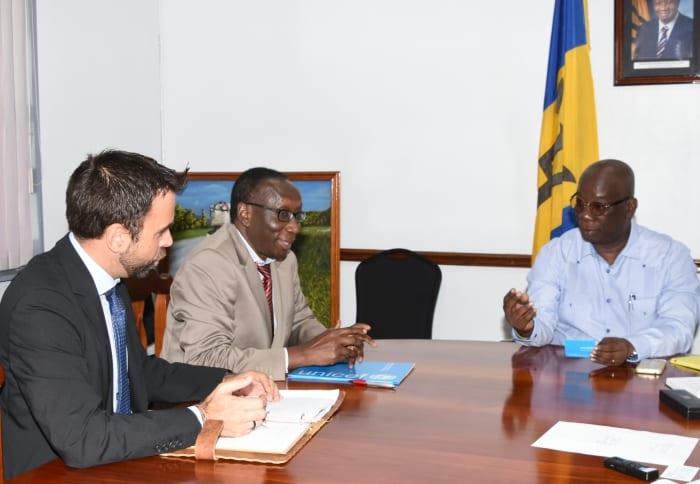 He added that Barbados’ building codes for private houses emphasised that buildings should be constructed to withstand Category 5 hurricanes. However, in the case of Hurricane Maria, he pointed out that no one expected the ferocity of the winds nor the damage that they inflicted.

While he lauded donor countries which pledged financial help to disaster impacted territories, the Education Minister explained that, as was the case with Haiti, many of the concessional funds, grants and other developmental aid never reached where they were needed most. He also noted that while personnel from developed countries usually rushed in to help, one also needed to consider the local expertise.

Additionally, Chief Education Officer, Karen Best, who is also the Chief Shelter Warden, noted that the procedures and programmes Barbados had in place in the event of a hurricane or natural disaster also spoke to resilience.

She pointed out that while Barbados had not experienced a hurricane of the magnitude of Maria, she was hopeful that the machinery would work to such an extent that the impact on the educational system and, by extension, Barbados’ infrastructure would be minimised.

In addition, Mr. Jones and Mrs. Best noted that the Ministry would appreciate UNICEF’s support in a number of programmes, including the continuation of the recently ended A Ganar Programme which was funded by the Inter-American Development Bank; the Schools’ Positive Behaviour Management Programme (SPBMP); an anti-violence programme in schools; and helping at-risk youth at the New Horizons Academy and the Edna Nicholls Centre.

Dr. Kamuragiye promised he would meet with Ministry officials in 2018 to see how UNICEF could assist in providing technical and financial support.