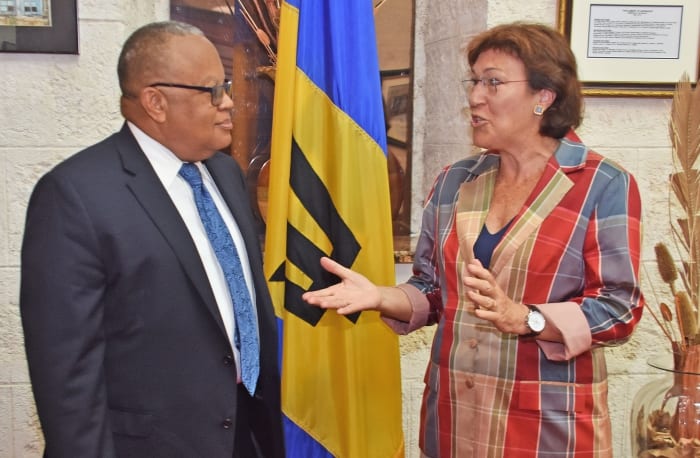 The establishment of a resident High Commission in Barbados by New Zealand provides both countries with the opportunity to deepen and enhance bilateral relations.

This was one of the conclusions drawn during a farewell courtesy call on Minister of Foreign Affairs and Foreign Trade, Senator Dr. Jerome Walcott, by outgoing High Commissioner of New Zealand to Barbados, Jan Henderson, held recently at Parliament.

Although Barbados and New Zealand established diplomatic relations on July 4, 1974, a resident diplomatic post was not created in the region until March 2014.

Senator Walcott stated he looked forward to deepening relations with New Zealand and thanked the High Commissioner for her work in renewable energy and agriculture.

The New Zealand High Commission has worked with the Inter-American Institute for Cooperation on Agriculture, the Ministry of Agriculture and the Caribbean Agricultural Research and Development Institute.  Along with the Royal Commonwealth Society, the Commission held the Agriculture is Food Cooking Competition to promote agriculture as a viable career choice to secondary school children.

High Commissioner Henderson said she enjoyed working with Barbados and the other Caribbean islands. She noted her country and the region had a shared loved for cricket and netball, and hoped to eventually see the sharing of coaching expertise.

The envoy called for more Barbadians to take advantage of post-graduate scholarships offered by the Government of New Zealand, especially since they were in critical target areas such as agriculture and fisheries, conservation, renewable energy and disaster risk management.

She pointed out that her mission worked on a geothermal plant in Dominica, and work was also done with this island’s Backbelly sheep.  They also discussed sports, climate change, Small Island Developing States, the Blue Economy, and disaster risk management.

High Commissioner Henderson’s tour of duty ends this month, after serving since March 2014.