No More Excuses For Immigration Department 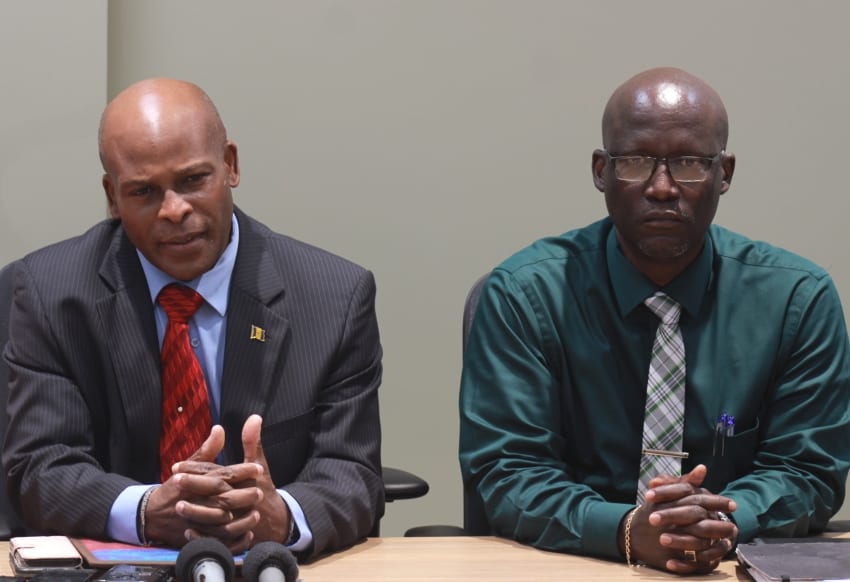 Minister of Home Affairs, Edmund Hinkson, speaking to the media following a tour of the new headquarters of the Immigration Department yesterday. Looking on is Chief Immigration Officer, Wayne Marshall. (M.Elcock/BGIS)

There should be no excuse for the Barbados Immigration Department not processing the applications of Barbadians in a timelier manner.

Acknowledging that the state of the previous location at Wharf Road had contributed to many of the problems, Mr. Hinkson said Government could not expect workers to produce at their maximum without putting them in the working environment and facilities that allowed them to do so.

However, he said that was expected to change now that they are at their new facility. “Now there will be no excuses for not facilitating the ease of the citizens of Barbados and people who reside in Barbados being able to get their applications which they have before the Immigration Department processed in a timelier manner,” he said.

The Minister stressed that Barbados could not continue to afford the situation where people applied for citizenship by marriage or by naturalisation and did not receive it after three to five years, having paid the required fees.

He pointed out that immigration-related matters contributed to the decline in the ease of doing business in Barbados over the last eight years, resulting in the island’s ranking dropping from 72 among global nations to 139 out of 165 countries.

The Minister disclosed that the Ministry of Innovation, Science and Smart Technology was presently assisting the Immigration Department with advancing the processes through the use of technology to make it easier, quicker and timelier to process applications.

He explained that these measures were important as it formed part of the process of improving business facilitation in Barbados, which was tied to productivity and the island’s socio-economic development.

Mr. Hinkson also said that Government was examining the Immigration Policy Reform Paper, and would soon bring it to Cabinet for discussion. He added that the Immigration Act, like the other Acts in the country, was in need of reform and modernisation.