No NSRL On Goods In Bridgetown Port

Goods in the Bridgetown Port can now be cleared without attracting any National Social Responsibility Levy (NSRL).

This disclosure came today from Acting Minister of Finance, Ryan Straughn, who insisted that those goods would attract zero per cent since the NSRL had been repealed on July 1, 2018.

Acting Prime Minister Santia Bradshaw held a press conference today at Government Headquarters, with Minister Straughn; Minister of Transport, Works and Maintenance, Dr. William Duguid, and their technical team to discuss the repeal of the NSRL and the abolition of road taxes from July 1, which were announced last month in Prime Minister Mia Amor Mottley’s Mini-Budget.

Mr. Straughn said: “Having consulted the actual text in the law, we recognised that persons are allowed to pay zero per cent in NSRL, even though the goods were landed before [July 1]….

“We have given the directive to the Customs Department that all goods in the port shall attract zero per cent National Social Responsibility Levy since it has been repealed. So from today, all of those goods should be cleared through the port with the normal duties and taxes that would apply, with the exception of NSRL.”

The Minister explained that there needed to be an overnight update to the system with respect to the Barbados Revenue Authority (BRA), given that it supported the Customs Department, and assured that it would be done. “The system will still reflect an NSRL entry but it will be zero going forward…. For any goods that land in Barbados from July 1, there is no NSRL that will be applied,” he stressed. 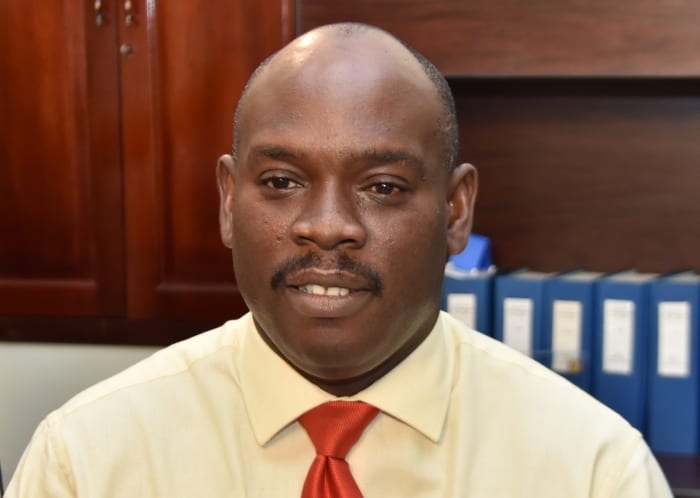 Acting Minister of Finance, Ryan Straughn, said goods in the Bridgetown Port can now be cleared without attracting any National Social Responsibility Levy (NSRL), since it had been repealed on July 1, 2018. (FP)

In relation to the abolition of the road tax on July 1, Minister of Transport, Works and Maintenance, Dr. William Duguid, said some persons whose tax was due in late June opted not to pay it.

“People came to the conclusion that if they did not pay their road tax at that time and they put down their car, that the road tax was not due. Clearly that was not the case. The tax remains due….,” he stressed.

Dr. Duguid disclosed that the BRA had put a system in place where taxes could be paid in instalments and it was now being extended to include road tax.

“So going forward, if you have road taxes that are due, what you can do when you present to the Licensing Authority, you can make arrangements to pay your due road tax in instalments…. You have to make a deposit but you will be able to make those further payments in instalments through the BRA,” he noted.

The Minister said taxes were needed so Government could use the money to fix the roads and improve drainage and infrastructure in the country.

Dr. Duguid disclosed that Government intended to implement a sticker which would be placed on the rear plate of cars as proof that the insurance was paid. “In due course, we are going to actually be able to mail that sticker to you with the registration card so you would not have to come and line up at Licensing Authority,” he stated.

He added, however, that there were certain teething processes that had to be gone through so Government could take the country forward.

To hear the complete audio of the interview click here.