No Pension Reform Needed Until 2048

This island’s Minister of Labour, Social Security and Human Resource Development, Senator Dr. Esther Byer Suckoo is giving the assurance that the National Insurance Fund (NIF) is sound and there is no need for reform at least for the time being.

She gave the vote of confidence in the fund last Friday during a press conference to release the 15th Actuarial Review of the NIF for the triennial period 2012-2014 at the Ministry’s Warrens Office Complex, location.

Insisting that the National Insurance Fund continues to be viable and there was no immediate threat, Senator Byer Suckoo said the purpose of the actuarial review was to “examine all the information, make projections based on what is happening locally and internationally  and determine what needs to happen to ensure the future viability of the National Insurance Fund”.

The Minister of Labour reiterated that presently, the actuary has indicated that there is no need for pension reform until between 2048 and 2074.

“Any pension fund would have to reform but you don’t want to do this too often.  [The Government] is under the programme that we have embarked upon in 2004 and there is no need for us to change course based on the advice in this particular document and this would signal to our pensioners and to those persons contributing and anticipating a pension that there is no need for them to panic,” Senator Byer Suckoo assured. 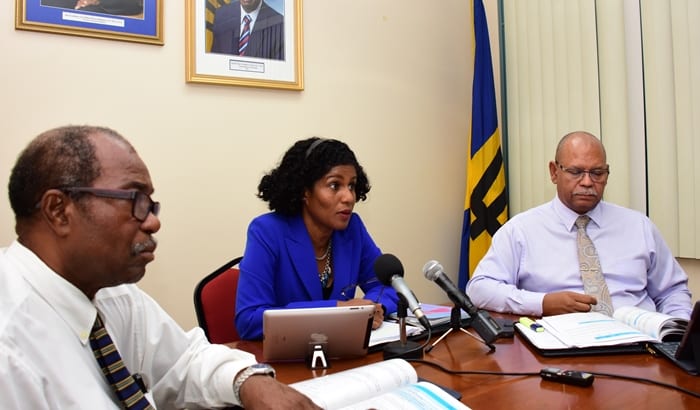 Minister of Social Security, Senator Dr. Esther Byer Suckoo speaking to members of the media at Friday’s press conference while Deputy Chairman of the National Insurance Board, Wismar Greaves (left) and Director of National Insurance, Ian Carrington, look on. (C.Pitt/BGIS)

However, she cautioned that if economic growth is weak, then Government would have to look at pension reform at an earlier date, around 2028 and 2045.

The Minister of Labour disclosed that the actuarial review has concluded that the NIF will be well funded and sustainable if Barbados can achieve sustained economic growth in the region of an average economic growth rate of 1 to 1.5 per cent or higher.

“That is the biggest concern and so it does not speak to the management of the National Insurance but speaking more generally as to what is happening in terms of our economic picture.  Economic growth would, of course, ensure that the National Insurance Fund as well as other indices, and other areas that we look at in Barbados would continue to be on a growth path,” Senator Byer Suckoo underlined.

She added that economic growth not only speaks to government’s ability to pay off what it has for National Insurance but it speaks to “an increase in employment, can speak to an increase in wages and contribution levels…With economic growth, as well, it would expand the opportunities for investment which is a concern that we have seen being expressed.”