NSRL Implemented After Much Discussion 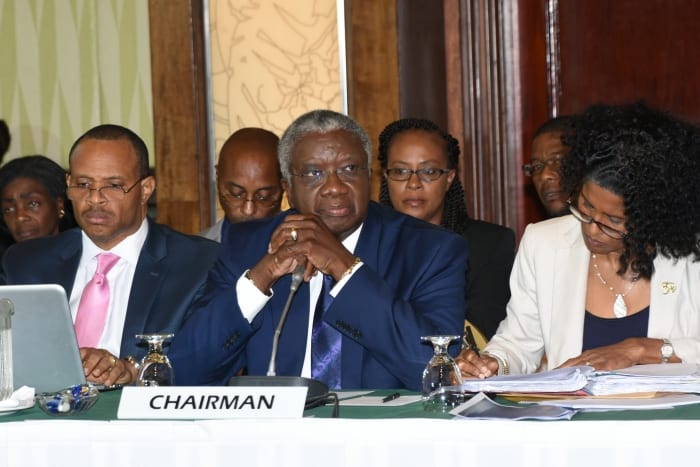 Prime Minister Freundel Stuart has reiterated that the increase of the National Social Responsibility Levy (NSRL) from two to 10 per cent was as a result of extensive discussion, and based on the serious economic challenges facing the country.

During his closing remarks at the end of the recent Social Partnership meeting at the  Hilton Barbados Resort, Mr. Stuart said he did not like the impression being given that the NSRL was the brainchild of an errant 16-member Cabinet.

“The Ministry of Finance and Economic Affairs is possessed of some of the most creative talent you can find anywhere in Barbados or the Caribbean…. We have experts in Government, experts whom we consult outside of Government, experts in the Central Bank and there are ordinary people in the society who make suggestions to us from time to time. That is how policy is distilled and how we are able to formulate particular measures and that is where the National Social Responsibility Levy had its genesis,” he explained.

The Prime Minister pointed out that the diagnosis showed that there was a serious deficit problem which had to be dealt with urgently.  He stated Government took the decision to increase the NSRL because the implications of going on the expenditure side would have been devastating for households.

He said that most of the measures suggested in the Fiscal Deficit Committee and the Foreign Reserves Committee were being addressed by Government. “Therefore, it is not true to say that the reports were just submitted and pushed one side…. The reports are receiving the active consideration and attention of the Government,” he contended.

He gave the assurance discussions would take place henceforth with a view to separating the short, medium and long-term recommendations from the reports.

Mr. Stuart said there had never been a time when Barbados was without foreign reserve challenges. He noted that the country borrowed its way out of the challenges in the past, but it was not being done in recent times for a multiplicity of reasons.

“We have fallen below the 12-week bench mark with our foreign reserves. Recent statistics made available to me indicated that between 1975 and 1986, at no time in any year did Barbados have 12-weeks of foreign reserves,” he stated.

In relation to the country’s revenue challenges, the Prime Minister indicated that Government had to make a huge sacrifice in the area of corporate revenue as a result of decisions made in Canada in 2007 and implemented in 2010.