Number Of In-Patients On The Decline 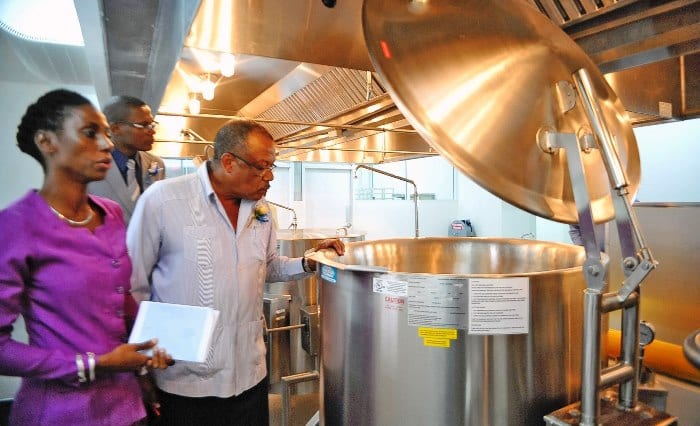 Health Minister, John Boyce examining some of the newly installed equipment in the kitchen at the Psychiatric Hospital. At left is Sales Executive at ESSCO, Vaughndeen Harper and in the background is Hospital Director, David Leacock. (A.Miller/BGIS)

The number of patients at the Psychiatric Hospital has been steadily decreasing as Government widens the availability of mental health care in the community setting.

Speaking at a ceremony to officially open a new kitchen facility at the hospital today, Health Minister John Boyce revealed that the number of in-patients at the institution had dropped from 640 to 510, and the new mandate was to further reduce that number by 10 per cent over the next five years.

Mr. Boyce said that the decision to place continued emphasis on community- based care in the primary health care setting was based on evidence that this was cost-effective, reduced stigma and encouraged greater access.

“Over the past 10 years, there has been an increase in the number of community-based psychiatrists and community mental health nurses…a growing number of clients, who are accessing care in the polyclinics, have never been inpatients of the Psychiatric Hospital,” he disclosed.

He added that while Government would continue to strive to provide adequate facilities and services at the hospital, “the policy directive is to continue seeking new approaches to appropriate care in the community or the least restrictive environment”.

Mr. Boyce said this approach must also be expanded to support other agencies in tackling the scourge of illegal drugs, noting that while there were ongoing discussions on the use of marijuana as prescription medication, society must guard against the harmful impact of recreational drug use.

“A large portion of young males admitted to this facility are victims of co-morbidities inclusive of illegal drug use. Along with embracing new technologies and treatment modalities, every effort will be made to protect our young, impressionable and vulnerable minds,” he asserted.

The new ultra-modern kitchen facility will become fully operational within two weeks. During that time, the dietary staff will undergo training by the suppliers of the specialised equipment.