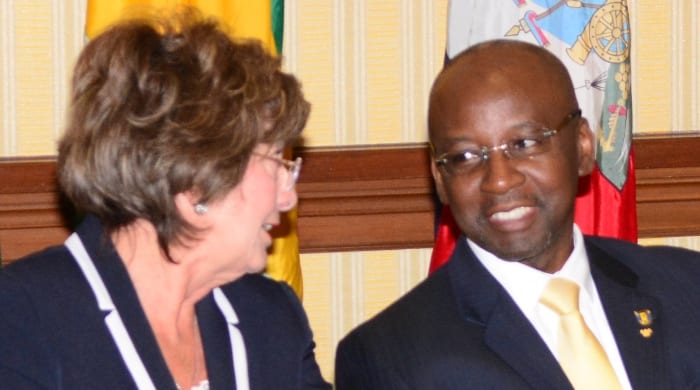 Minister of Culture, Stephen Lashley, in a tête-à-tête with U.S. Ambassador to Barbados, Linda Taglialatela during a Showcase of Achievements of Phase 2 of the OAS Cultural Heritage Project at Hilton Barbados today. (C.Pitt/BGIS)

Minister of Culture, Stephen Lashley, is concerned that the Organization of American States (OAS) will not be able to adequately assist the region if it does not re-establish “an adequately staffed” department with responsibility for Culture.

Mr. Lashley shared this concern as he addressed the OAS’ Showcase of Achievements of Phase 2 of its Cultural Heritage Project, at the Hilton Barbados Resort today.

The Minister said that as a region, there was a need to “lobby aggressively” for a fully staffed culture department within that organisation, as the development of the cultural sector was one of the key solutions to the social and economic challenges faced by the region.

He continued: “In order for the cultural industries and other emerging sectors to have maximum economic impact on our vulnerable economies, we have to integrate them fully and more purposefully into our economic strategies and with the requisite resources.”

Mr. Lashley noted that there was a need to consider built heritage as having the potential to contribute significantly to the region’s economies.

“We are moving in the right direction.  The heartening increase in the number of Caribbean sites inscribed in recent years on the UNESCO World Heritage List bears testimony to this…Not only will economic benefits accrue as we enhance our cultural tourism product, provide new opportunities for employment and increase foreign exchange earnings, but we will also allow our people to develop greater confidence in their history,” he suggested.

The Minister also expressed his appreciation for the guidance, and technical and financial assistance received from organisations such as the OAS.