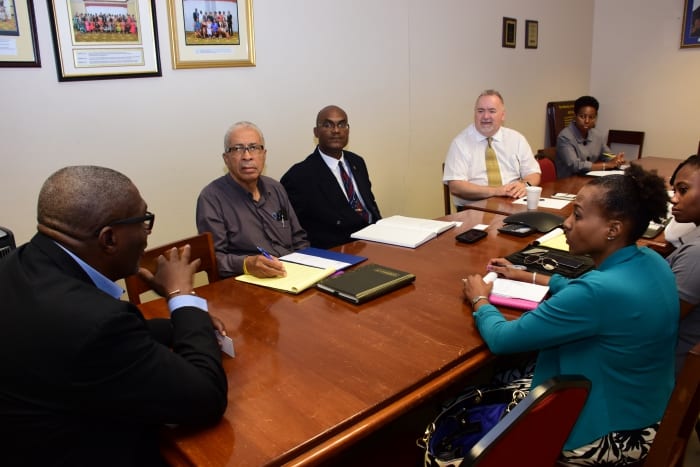 Acting Minister of Labour, Social Security and Human Resource Development, Senator Harcourt Husbands (left)in discussion with President of the Institution of Occupational Safety and Health (IOSH), Graham Parker (fourth from left) while other officials look on during a meeting today. (C.Pitt/BGIS)

The observance of sound occupational safety and health practices in workplaces came into sharp focus, when President of the Institution of Occupational Safety and Health (IOSH) Graham Parker, paid a courtesy call today on Acting Minister of Labour, Senator Harcourt Husbands.

During the meeting, Mr. Parker said his organisation was committed to working with institutions to promote healthier work places; and to achieve lower staff turnover and higher productivity, which should lead to improved economic performance.

Chair of the IOSH’s Caribbean Branch, Curt Cadet, mentioned that most countries in the region were at different stages in their adoption of occupational safety and health (OSH) practices. He lamented the slow pace of moving from one stage of legislation and regulation to another.

Meanwhile, Senator Husbands was heartened that although Barbados had made some strides towards building a culture of occupational safety and health, he admitted that “we still had some ways to go”.

He also discussed with Mr. Barker OSH and the impact of Brexit; training and internships for locals in OSH; and membership in the IOSH.

The IOSH has 47,000 members spread across 120 countries worldwide.